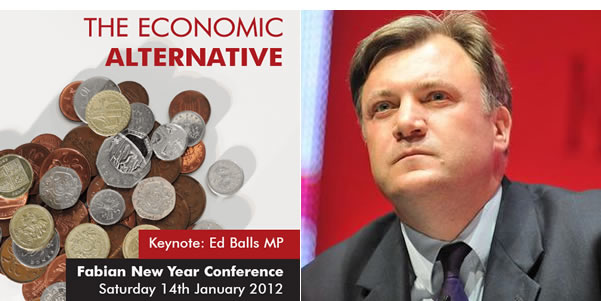 Ed Balls seized the initiative on the economy last night by announcing that Labour, if elected, couldn’t commit to reversing the coalition’s cuts and would maintain the public sector pay freeze, saying the party “cannot duck that reality and won’t”.

The bold move, in an interview in The Guardian and column on LabourList, comes ahead of his keynote speech on the “economic alternative” to the Fabian Society in central London this morning.

In a move that will wrong-foot the Right and enrage sections of the Left, the shadow chancellor asserts:

“My starting point is, I am afraid, we are going to have keep all these cuts. There is a big squeeze happening on budgets across the piece. The squeeze on defence spending, for instance, is £15bn by 2015. We are going to have to start from that being the baseline.

“At this stage, we can make no commitments to reverse any of that, on spending or on tax. So I am being absolutely clear about that.”

While on the need for pay restraint, Balls adds:

“It is now inevitable that public sector pay restraint will have to continue through this parliament. Labour cannot duck that reality and won’t. There is no way we should be arguing for higher pay when the choice is between higher pay and bringing unemployment down.

“I know there will be some people in the trade union movement and the Labour party who will think, of course, Labour has got to oppose that pay restraint in 2014 and 2015. That’s something we cannot do, should not do and will not do.

“It is true to say public and private sector workers are paying the price for the mistakes of the past 18 months, but we cannot promise higher wages for public sector workers when public spending is tight. When the cost of rising unemployment is pushing up borrowing, we had to make a tough choice.”

Balls says it is as a result of George Osborne’s failure to bring down the deficit and deliver growth that Labour has to accept the restraint of what Ed Miliband called the “new reality” of “difficult times when there is not much money around” in his speech to London Citizens on Tuesday.

“Even if Osborne took our advice to kickstart the recovery, there are still going to be difficult choices to make. Jobs have to come before higher pay and that is why that restraint on spending and on pay is important for Labour.”

Adding of the need for Labour to demonstrate credibility:

“I admit that we have a big task ahead for the future to show that we are the people to take the tough decisions… If we are seen as the people that are short-term, soft touch, give into vested interests, throw money at every problem of course we are never going to succeed.”

Balls is determined to show everything about his pedigree, and current strategic thinking shows he gets the political challenges facing the party on trust, credibility and the economy… Balls says he has had shadow cabinet members asking for permission to promise to reverse a specific cut, and that they have all been spurned.

With the FT’s Jim Pickard noting (£):

An aide to Mr Balls said that it had not been easy for him to commit to spending reductions, given that “as a constituency MP, he has seen the damage done to communities” by the ruling coalition’s cuts. Yet given the tough times, Labour will have “no choice” other than to make difficult decisions, the shadow chancellor will say…

Mr Balls has faced frustration from some Blairite MPs within his party about an apparent reluctance to flesh out how Labour would tackle the national deficit. Yet he will insist that the coalition’s “public retrenchment” has worsened Britain’s vulnerable economic situation.

Meanwhile on LabourList, Balls, insisting jobs “must be our priority”, goes into more detail about his pledge to maintain the coalition’s pay freeze:

“Public as well as private sector workers are paying the price for David Cameron and George Osborne’s mistakes. But Ed Miliband and I cannot just promise public sector workers higher wages when public spending is so tight and the costs of rising unemployment are pushing up borrowing projections so massively.

“The fact is that in 2012 – apart from those at the very top – everyone in work, in the public and private sector, is going to experience a real incomes crisis: the combination of higher inflation and the rising cost of living, wage freezes, cuts in tax credits, overtime and bonuses withdrawn, some full-timers being asked to work part time and for thousands losing their jobs entirely.

“It was always going to be hard, but it is much tougher because of George Osborne’s mistakes. And we cannot reverse all that damage.

“Even if George Osborne acts now, as he should, to kick start the recovery and get unemployment falling, as we and the IMF have advised, Labour will have to make difficult choices, as Ed Miliband set out in his speech earlier this week. And jobs must be our priority before higher pay.”

“Pay restraint in the public sector in this parliament would have been necessary whoever was in government. But George Osborne’s economic mistakes mean more difficult decisions on tax, spending and pay. It is now inevitable that public sector pay restraint will have to continue for longer. Labour cannot duck that reality. And we won’t.”

In his speech to the Fabians today, Balls will flesh out in more detail where he stands, forensically taking apart the government’s failings and outlining the challenges ahead.

On the big challenges, he will say:

“If Britain and the world are to avoid repeating the mistakes of that 1930s ‘lost decade’ and the 2008 global crisis, then we badly needs political leadership in Britain, Europe and the world to meet two great challenges.

“The Growth Challenge – to stop the aftermath of the financial crisis turning into years of slow growth, high unemployment and rising debts – leaving a permanent dent in our nation’s prosperity; and

“The Reform Challenge – long-term reform to make sure such a financial crisis on this scale cannot happen again and to build a stronger and fairer economic model for the future – what Ed Miliband has called a more responsible capitalism – which can, even in tougher times, meet our aspirations for social justice and strong public services.”

On the government’s failures, he will say:

“Every time George Osborne revises down his growth forecast, he has to revise down tax revenues and increase the benefits bill.

“And what is the long-term cost? How much more will it cost our society and our economy to leave those young people long-term unemployed and unproductive; they and their children receiving benefits rather than paying taxes and contributing to the national wealth?

“If we do not invest now in jobs and growth, if we let a year of economic flat-lining become a decade of stagnation, what price will our country pay in the long-term?

“That is why to meet the Growth Challenge and get the deficit down we are right, as we have set out in the five point plan for jobs, to call for temporary tax cuts and investment in jobs and growth – to stop a decade of slow growth and higher debts becoming a self-fulfilling prophecy.

“In short, action now for growth, jobs and reform does not conflict with the need for a credible medium term plan on the deficit, it reinforces it.”

On the need for discipline, he will say:

“However difficult this is for me, for some of my colleagues and for our wider supporters, we cannot make any commitments now that the next Labour government will reverse tax rises or spending cuts. And we will not.

“But we now know the next Labour government will have to sort out the deficit where this government failed and deliver social justice with less money.

“And as we make the argument that cutting spending and raising taxes too far and too fast risks making the economy and the deficit worse not better, it is right that we set out where we do support cuts and where we would be making the tough but necessary decisions…

“Times will be tough – we will have no choice but to make difficult choices.”

And on the political challenge for Labour, the shadow chancellor will say:

“As a party and a leadership, I said then and I still believe now, that Labour should have been clearer before the election that if we had been re-elected there would have been spending cuts as well as tax rises.

“And I have no illusions that there is a big task to turn round Labour’s economic credibility and show that – even as unemployment rises, growth stagnates and long-term reform stalls – Labour can be trusted again.

“The challenge we face is both to set out a radical and credible alternative; and to win public trust for that alternative vision.”

As Anthony Painter, author of ‘In the black Labour’, says, this could well be “a potential game-changer”; Balls’s “tough but sensible messages”, as Peter Watt calls them, will have the effect of blunting the Tories’ biggest line of attack, save for some short-term discomfort, and, in time, may lead to an upturn in Labour’s poll ratings on the economy, and the public’s willingness to trust Balls and Miliband as much as they do Osborne and Cameron – the ‘credibility deficit’.

This is not the position Labour will have wanted to be in – they’ve been proved right on the dangers of cutting too far and too fast, but cut far and fast the coalition have, this is the reality of where we are and where we’ll be in 2015. Only by looking to the future can Labour hope to win that election, and by accepting the reality of how that future will look, Ed Miliband and Ed Balls have made that eventuality look that little bit more likely.

• Politics vs Economics: setting the scene for the Fabian’s Next Economy conference – Marcus Roberts, January 13th 2012

50 Responses to “Balls throws down the gauntlet: “We are going to have to keep all these cuts””