UK Growth is miserable and about to dive into recession according to the OECD. However, the government can't blame it all on external factors - we're doing worse than most OECD countries. 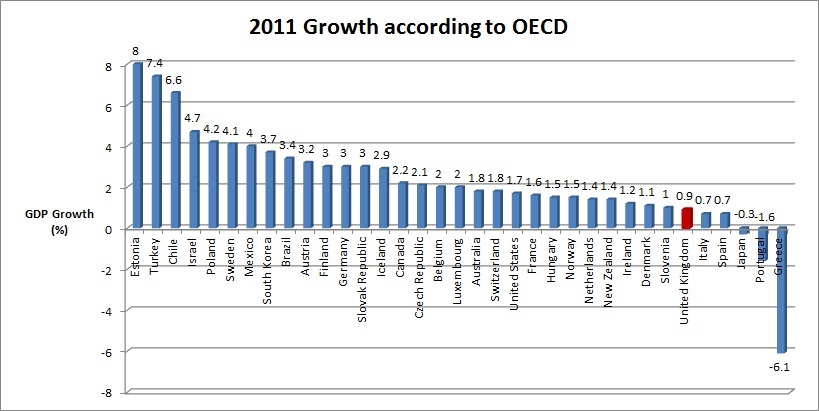 The government would like to have you believe that Britain is slipping into recession as part of the global slowdown, and our contracting growth has little to do with conditions inside our country.

Yet, among developed countries, UK  growth has been far behind most of our competitors. Among this morning’s output from the OECD was an estimate of British growth for 2011 of a meagre 0.9%. The only European countries that produced less growth according to the organisation than the UK are so-called PIGS – Portugal, Italy, Greece and Spain:

The PIGS were ‘honoured’ by financial analysts with a shared acronym due to their common problems with debt. But the UK still managed to come behind Ireland (1.2%), that was briefly included in the PIGS and such economic powerhouses as Iceland (2.9%).

Meanwhile, the dead hand of the state appears to have been somewhat kind in red tape-bound France (1.6%) and Finland (3%). Someone tell Steve Hilton and Vince Cable.

• Osborne should change course next Tuesday, but he won’t – Tony Dolphin and Adam Lent, November 23rd 2011

• New LSE report says Labour’s economic record was “strong” and “not due to bubbles” – Will Straw, November 15th 2011

31 Responses to “UK growth – bottom of the table, wallowing with the PIGS”