Alex Hern covers the embarrassment to the Conservative Party that is the Oxford University Conservative Association, the racist, bigoted Oxford Uni Tory club. 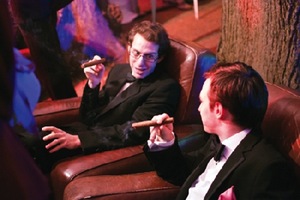 The Oxford University Conservative Association has often been seen as a training ground for future party leaders.

It counts amongst its prior members William Hague, Theresa May, Jeremy Hunt, Ted Heath and Margaret Thatcher, as well as numerous others. It dates back to 1924, when, according to its website, it was founded to replace the “disparate multitude of dining clubs” which had previously represented Oxford Conservatism.

It is also a perpetual embarrassment.

OUCA has hit the headlines this week because of an investigative piece by the Oxford Student newspaper, sadly not online.

The Telegraph summarises the fallout:

Four of the Association’s most senior members have announced they will be resigning after members allegedly sang a Nazi-themed song, while others complained that members from working-class backgrounds were ridiculed by a clique of former public schoolboys.

Students are now facing possible disciplinary action by both the University and the Conservative Party, both of which have launched investigations.

The Mail has further details:

The song’s full version, to the tune of Jingle Bells, continues: ‘Dashing through the Reich / in a black Mercedes Benz / killing lots of kike / ra ta ta ta ta.’

One OUCA member told the OxStu:

Lots of people were singing it that night, and indeed on many other nights, and the general attitude is that that was OK.

This is not the first time OUCA has faced nationwide disgrace.

The Telegraph reported in June 2009:

At the hustings last Sunday, Nick Gallagher, who is running for Political Officer, a role that liaises with the national Conservative party, was asked to tell the most racist joke he knew as well as name his least favourite minority.

Mr Gallagher, the current Publications Officer, reportedly said: “What do you say when you see a television moving around in the dark? Put it down you n****r or I’ll shoot you!”

Another member allegedly made a joke about a family of black people being lynched.

That incident led to the University to disown the association, forcing it to drop the U from its name.

This at least hadn’t had to happen the year before, when OUCA had to bring in Anne Widdecombe to defend its use of sexist advertisements at the fresher’s fair:

The controversy erupted after a poster prominently displayed around the OUCA stall at the OUSU Freshers’ Fair pictured an attractive young woman above the caption “Life is better under a Conservative.”

“What a load of politically correct nonsense,” [Widdecombe] said when asked for her reaction.

“I might find the joke coarse, but I don’t find it sexist.”

The Guardian covers the longer history of the association:

In 2000, four members of OUCA were kicked out of a meeting of Oxford University Student Union for what the student press described as “a deliberate disruption of proceedings, involving Nazi-style salutes, cries of ‘Viva Pinochet’ and alleged drunken behaviour”.

In 2004 OUCA’s ex-treasurer was found guilty of bringing the organisation into disrepute after writing an article claiming that “the problem with India is its culture [which is] stained by two main features which hold the country down continually with little sign of change: democracy and Hinduism”.

It’s not even the first time they’ve sung that song:

In late 2007 OUCA members were exposed in the student press for singing drinking songs that went “Dashing through the Reich/In a black Mercedes Benz/Killing lots of kikes/Ra ta ta ta”.

All of this would lay doubt on claims that OUCA is the future of the Tories – except that this pales in comparison to the university ‘antics‘ of the prime minister, chancellor, and mayor of London. Plus ça change, plus c’est la même chose…