Friends of the Earth today described the government’s omission of shipping from its climate targets as “like an alcoholic giving up all booze except whisky”. 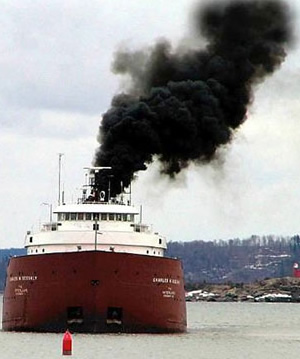 Friends of the Earth today described the UK government’s omission of shipping emissions in its climate targets as “like an alcoholic giving up all booze except whisky”.

FoE were responding to the Committee on Climate Change’s Review of UK Shipping Emissions, published this morning, which warns the UK’s share of international shipping could account for up to 11 per cent of British emissions by 2050.

The CCC, like FoE, says shipping emissions should be included in the UK’s 2050 climate targets.

It sets out options for the inclusion of shipping in UK carbon budgets – a cap on the total quantity of greenhouse gas emissions that can be emitted over a five year period.

Under the Climate Change Act the UK has to cut its emissions by 80% (of 1990 levels) by 2050 – yet this target doesn’t include the UK’s share of emissions from international shipping or aviation.

“Leaving out the UK’s share of international shipping from our climate targets would be like an alcoholic giving up all booze except whisky. Ignoring the growing climate impact of shipping would be a titanic mistake which could sink our ability to develop a safe and prosperous future.

“The international community must also take urgent action to ensure the shipping industry plays its part in a low-carbon transport system.”

In 2007, the International Maritime Organization (IMO) estimated carbon dioxide emissions from shipping – then estimated at at 4-5% of the global total – could rise by up to 72% by 2020 if no action gets taken.

At the time, the Guardian reported:

Aviation carbon dioxide emissions, estimated to be about 2% of the global total, have been at the forefront of the climate change debate because of the sharp increase in cheap flights, whereas shipping emissions have risen nearly as fast in the past 20 years but have been ignored by governments and environmental groups.

Britain downplays the problem, saying that ships in UK waters emit less than two million tonnes of carbon dioxide a year. But no record is kept of the fuel used and most ships take on fuel outside Britain. Although the industry maintains that ships are more efficient at transferring freight than air, it admits improvements can be made.

More recently, in 2009, a study found one giant container ship could emit “the same amount of cancer and asthma-causing chemicals as 50m cars”, concluding the health risks of shipping pollution had been “underestimated”.

The Guardian reported the findings:

Britain and other European governments have been accused of underestimating the health risks from shipping pollution following research which shows that one giant container ship can emit almost the same amount of cancer and asthma-causing chemicals as 50m cars.

Confidential data from maritime industry insiders based on engine size and the quality of fuel typically used by ships and cars shows that just 15 of the world’s biggest ships may now emit as much pollution as all the world’s 760m cars. Low-grade ship bunker fuel (or fuel oil) has up to 2,000 times the sulphur content of diesel fuel used in US and European automobiles.

Finally, some stats to ram home the scale of shipping pollution, which Friends of the Earth and the Committee on Climate Change both say should be included in the government’s emissions targets:

• Shipping is responsible for 18-30% of all the world’s nitrogen oxide (NOx) pollution and 9% of the global sulphur oxide (SOx) pollution;

• One large ship can generate about 5,000 tonnes of sulphur oxide (SOx) pollution in a year;

• Seventy per cent of all ship emissions are within 400km of land;

• Eighty five per cent of all ship pollution is in the northern hemisphere.