Alex Hern warns that, necessary as an economic stimulus is, it could simply end up being a hand-out to big business. 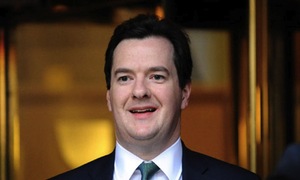 In actual fact, a large amount of the money is being invested in areas of the economy which will do far more to help the sort of big businesses which have the ability to lobby government.

The best example of this is the £25 billion that’s being given over to “infrastructure investment”. Rather than being invested in sustainable industries, such as green technology or public transport, the vast majority of this money is expected to go to power stations and toll roads.

As the Telegraph reports:

The £20bn of targeted cash from pension funds will be channelled through the “Pension Infrastructure Platform” (PIP) – a new body that will bring together capital from disparate UK pension funds and invest in assets such as roads and electrical power stations with a minimum of 60pc equity.

As we have argued before, new road projects are by their nature expensive; they have a ‘bottom line’ specification that means cutting scheme costs by a large proportion is difficult. And a green new deal makes just as much sense now as it did when we called for it in 2010:

Right now the economic framework is still rigged in favour of a continuation of our failing high-carbon “business as usual” model, which means the UK is missing economic opportunities, leaving itself vulnerable to rising and volatile fossil fuel prices, and failing in its efforts to go green.

Without a coherent green financing strategy, and without using the big economic levers of government, it is unlikely that the private sector will be able to deliver the necessary investment to meet UK climate and energy security targets, to realise the potential for economic growth and for job creation here, particularly in the clean energy and home improvement sectors.

The chancellor is also expected to announce a ‘credit easing’ scheme. The Guardian predicts:

Details are expected of a plan to unlock £40bn of bank lending for small businesses. The government will underwrite the lending.

Despite the name, this is not hugely similar to the quantitative easing which the Bank of England has done twice now. That involved the Bank’s money being used to buy financial instruments, in effect giving free money to the banking system.

By contrast, credit easing involves the government encouraging banks to make standard loans to small businesses by telling them that the treasury will take on the risk. This means that the banks get all of the profit and none of the loss… in effect giving free money to the banking system.

Finally, the government has plans to help the housing market. The BBC expects:

• Mortgage indemnity scheme to help 100,000 people get onto the property ladder

The mortgage indemnity scheme we have covered before. The government will underwrite 95 per cent mortgages to first buyers, ensuring that the lender takes on less risk than they otherwise would. This in effect gives free money to the banking system.

Even City AM couldn’t get behind this one, calling it “Brownonomics“. I believe they mean this pejoratively.

The extent to which housebuilding plan is a pork project will depend on the execution. The money could be distributed to local authorities, to buy back vacant properties and turn them into low income housing. Or it could be a half billion handout to housing firms to do what they should be doing anyway – building then selling housing.

Although at least that wouldn’t give free money to the banking system.