The latest news from Egypt, where bloggers are being arrested and protesters are being shot with American-made teargas, in a haunting repeat of the Spring. 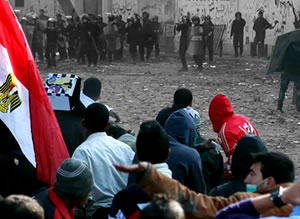 One month on from a presidential candidate’s warning that a prolonged transition to full democracy could plunge Egypt into “anarchy”, the country appears to be entering into a period of upheaval reminiscent of the popular uprising that led to the fall of Hosni Mubarak.

Protestors have entered Tahrir Square out of a fear that the interim military government will try to retain its grip on power, and have faced harsh crackdowns.

The International Federation for Human Rights has released a statement detailing and condemning the violence it has witnessed:

FIDH visited one field hospital located in a mosque in the vicinity of the Ministry of Interior and witnessed the constant flow of injured people arriving from nearby streets after they were suffocated from the very agressive tear gas widely spread by the Central Security Forces.

The doctors met by FIDH in the hospital also report a large number of people sustaining injuries from rubber bullets in the upper part of their body, especially the nose and the ears and the forehead.

The shooting of rubber bullets in the head also resulted in several people loosing sight in one of their eyes, among which activist Malek Malek Mustafa, and Al Masry Al Youm photographer Ahmed Abdel Fattah.

The Military eventually raided Tahrir Square on Sunday late afternoon, setting tents on fire and dispersing the protesters who soon reoccupied the area. Clashes continued over night. According to doctors and direct witnesses, live ammunitions were used by the police forces, in addition to rubber bullets and large quantities of tear gas.

Some of the scenes from this weekend have been reminiscent of the worst of the Arab Spring. Graphic videos of protestors, seemingly unconscious or dead, being beaten by riot police, or being shot at with rubber bullets and tear gas – including some “Made in USA” – have spread widely, and neither the army nor the protestors seem likely to step back any time soon.

The military is also using less violent, but just as insidious, methods of repression. Alaa Abd El Fattah, an Egyptian blogger and software developer, was arrested in October for attending a protest at which 28 died when the military intervened. 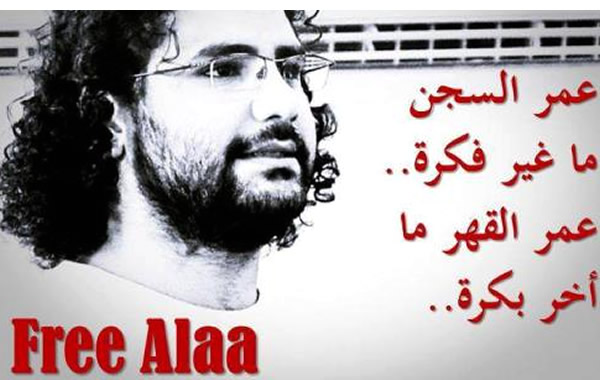 Regarding that protest, the New York Times reported:

Although the authorities initially blamed that night’s violence on protesters, eyewitnesses claimed that soldiers had used excessive force, firing live ammunition and driving armored personnel carriers into crowds outside the headquarters of state television, known as Maspiro.

Reporting on the “charges” Alaa faces, the NYT says:

As the Committee to Protect Journalists explained on Monday, days before he was summoned by the military prosecutor, Mr. Fattah published an opinion piece in the independent daily Al-Shorouk in which he criticized the military’s investigation of the clashes, “saying it could not conduct an impartial investigation into its own activities.”

Mr. Fattah’s article for the Egyptian newspaper also described what he witnessed at the protest, and at a Coptic hospital where the wounded and dead were taken after it. He referred pointedly to the soldiers now ruling Egypt as “Mubarak’s military.”

As Salon reports, the military rulers of Egypt really appear to be a case of “meet the new boss, same as the old boss”:

The SCAF [The Supreme Council of the Armed Forces] has kept in place emergency laws that were a mainstay of Mubarak’s rule, and penal code provisions that provide incarceration for such supposed crimes as besmirching Egypt’s image or insulting the president. The generals have added to these repressive laws by decreeing strikes illegal, and prosecuted activists for criticizing the military.

Some detainees have been tortured in custody. The SCAF also proposed a “draft guide” to a new constitution that would give the military effective veto over its articles and keep future military budgets off-limits to public scrutiny.

Though Parliamentary elections are scheduled for November 28th, there is no date set for Presidential elections, which may not happen until 2013, prompting Presidential candidate Amr Moussa to warn yesterday that he feared a prolonged transition to full democracy could plunge Egypt into “anarchy”.

“My biggest fear is anarchy. A long transitional period is not in the interest of Egyptians nor Egypt… [it will] slow action to support the economy and also will create an opportunity for all those who want to play havoc with the Egyptian society…

“So economy and security, lack of them, would lead to anarchy.”

Hopefully it will not come to that, but a week today we’ll know the answer.