Left Foot Forward’s Alex Hern reports on the creation of a property market in Cuba for the first time since 1959. 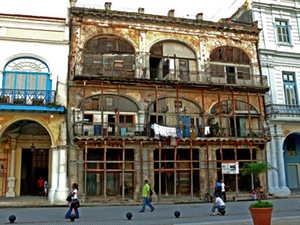 Cuba faces a private property revolution this week. Raúl Castro, the President, has passed major changes to the way housing is held in the country, effectively legalising the sale of homes for the first time since 1959.

Until now Cubans who want to move have used Cuba’s permuta system. It involves finding someone with a property of approximately equal size and agreeing to swap. Supposedly, no money is involved, but the deals invariably include under-the-table payments and no benefit for the government.

The new, legal market will not be unrestricted. Foreigners, apart from those who have permanently emigrated to Cuba, will not be allowed to buy property. (The Cuban government is still considering a separate scheme that would allow foreigners to buy new-build houses around proposed golf courses on the island.)

Cubans will be limited to owning a maximum of two homes each, with one being designated a “holiday home”. A stamp duty of four per cent will be charged to both the buyer and the seller. The buyer will have to prove that the source of any funds is through legitimate means.

What’s happening is president Raul Castro is trying to create communism with a human face. They’re trying to get rid of lots of little rules and restrictions that people really don’t like and this concept of private property is the most important so far. But it’s not an unravelling of communism.

What happened is that when people left Cuba after the revolution, their houses were confiscated, and families were moved in. Over the years, people were given deeds to the property they live in.

Now, most people in Cuba have deeds to their homes, and they’ve been able to pass them on to their children or swap them so long as money doesn’t change hands, but they couldn’t buy or sell. But how do you swap a one-bedroom apartment for a five-bedroom house without money?

So this gets rid of a system which really annoyed and angered a number of people.

But one of the problems is that there is no housing market – how do you value, how do you price houses? They’ve only recently allowed people to buy and sell cars. They’re going for absolutely silly money. A Cuban friend has an old Russian Lada, he looked after it well; he was offered $60,000 for it!

Liberalising a market without fully thinking it through? Could this be the first time there’s ever been a similarity between Cuban communism and Cameroon conservatism???

• When democracy clutches at straws – Daniel Elton, May 6th 2011