Sabby Dhalu argues that racism in sport is just as serious as racism off the pitch, and needs to be fought in the same way. 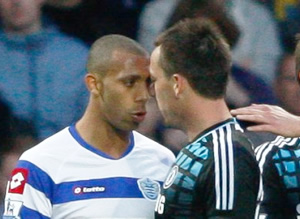 Golf caddie Steve Williams’s alleged racist comments regarding Tiger Woods are the latest episode in what appears to be a phenomenon of racism in sport.

Racism in sport is not new. Back in 2008 Lewis Hamilton was subjected to crude racism by opposing fans in Spain, who painted their faces black. In 2004 Ron Atkinson was forced to resign as an ITV football commentator, following alleged racist comments directed at Marcel Desailly.

Perhaps the worst incident involving sportsmen, was the violent attack on Asian student Sarfraz Najieb in 2000 involving Jonathan Woodgate and Lee Bowyer, both at the time played for Leeds United. Najieb was bitten on the face, and suffered a broken leg, nose and cheekbone.

Woodgate was found guilty of affray and both Woodgate and Bowyer were cleared of grevious bodily harm. While the trial judge said there was no racist motive to the attack on the student, Najieb claims he was called a “Paki” before the attack.

Racism in sport is nowhere near as bad as it was four decades ago, and we seemed to enjoy a period of peace in the late eighties and nineties. So why the reemergence of it during the last decade?

Racism in sport is a reflection of racism in wider society.

The 1970s saw Enoch Powell’s “Rivers of blood” speech and the growth of the National Front. So it is no surprise that, in this climate, black footballers were subjected to bananas being thrown at them and black supporters were some times subjected to violent attacks, even by fellow supporters of the same football clubs.

At the start of the noughties we experienced the worst political attacks on immigrants since powellism in the 1970s, with politicians and newspaper headlines frequently attacking asylum seekers in particular. This followed a rise of Islamophobia post 9/11 and 7/7.

This climate provided fertile ground for the British National Party’s unprecedented electoral gains for a fascist organisation in Britain. This electoral growth – the breakthrough to the European Parliament in 2009 specifically – emboldened the English Defence League (EDL) to organise racist demonstrations on Britain’s streets reminiscent of the 1970s National Front demonstrations.

The EDL recruits support from football hooligans through “casuals united”. Two years on the EDL is still growing and continues to organise demonstrations.

Now, amidst the worst international economic crisis since the 1930s great depression, false racist arguments are advancing with immigration being wrongly blamed.

Take David Cameron’s speech on immigration a few weeks before this year’s election. Or the absence of a sensible debate on the economy prior to the 2010 general election and instead a debate on how immigration was to blame and what policies to reduce it. This is not the first time in history where failure to deliver solutions to economic crises paved the way for immigrant communities to be scapegoated.

This is the context within which racism in sport is rearing its ugly head. It is a symptom of racism in society as a whole and is not unique to sport.

All racism, where ever it manifests itself, must be confronted by robust action. Black people are free from slavery, to walk on our streets without fear of relentless racist abuse and attack, to vote, and to compete in top level professional sport, because people actively campaigned against racism. It didn’t happen by itself.

Therefore I welcome the Football Association’s investigations into John Terry and Luis Suarez.

It is interesting though, that the furore surrounding Terry’s affair with Wayne Bridge’s girlfriend Vanessa Perroncel, prompted England Manager Fabio Capello to strip off the England captaincy from Terry but the allegation of racism has not prompted the same response to the now reinstated England captain.

The police are also investigating Terry after a supporter reported the incident to the police. Racist abuse after all, whether verbal or physical, is against the law.

The Formula 1 Association launched the “race against racism” campaign following racism against Lewis Hamilton. Ron Atkinson was forced to resign his role as ITV football commentator as a result of his comments.

But what action is being taken against Steve Williams? Thus far none. It is how institutions respond to racism that is crucial and will prevent further incidents of racism. The International Golf Federation should launch an investigation into Steve Williams. An apology is not enough.