Give the eurozone countries a few hours or days, and we’ll find them in a grimmer mood as reality sets in - just like after the July 21st package, writes George Irvin. 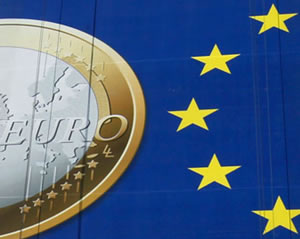 The markets initially rejoiced at the news Europe has finally reached a deal; but give them a few hours or days, and we’ll find them in a grimmer mood as reality sets in – just like after the July 21st package, writes George Irvin

First, take Greece. The 50 per cent ‘voluntary’ haircut for Greek bondholders negotiated by the German Chancellor with the Institute of International Finance (IIF) has no binding force, which is why it is ‘voluntary’ and will not trigger the Credit Default Swap’s insuring bond repayment.

So, when push comes to shove, there’s no reason why bondholders should accept a 50% cut in lieu of a full (or nearly so) insurance payout – and it only takes one major institutional bondholder to reject the ‘deal’ for the house of cards to collapse.

Equally, Europe’s leaders claim Greece’s debt-to-GDP ratio will fall from 160% at present to 120% by 2020. But for the debt ratio to fall, national income must rise faster than the interest rate on public borrowing.

At the moment, national income is plummeting – and further austerity will make growth nearly impossible. Because markets now believe a Greek default is almost inevitable, it would be far wiser for European leaders to agree to 100% debt forgiveness now and outline a growth plan.

Turning to the European Financial Stability Facility (EFSF) and the €2tn ‘big bazooka’ meant to shock and awe the markets, what we have in its place is a shakily leveraged €440bn (of which only just over €200bn is effectively available) turned into a €1 trillion insurance fund covering the first 20% of a loan.

Will this sum convince the markets sovereign debt is now worth buying?

The problem with mortgage bonds was that by 2008, nobody quite knew how much toxicity they contained. In this case, nobody quite knows, how much contagion a default (say, by Greece) would bring – eg, would it spread to Italy and then France? And therefore how much of a haircut they would take on what are currently seen as low-risk sovereigns.

There’s another problem too

Even assuming only €1trn is a sufficient sum, the money has yet to be raised, mainly from outside Europe. The big EA countries like France cannot guarantee further funds without risking the loss of their AAA credit rating. This is the main reason for building into the deal Special Purpose Investment Vehicles (aka SPIVs) designed to tap money from the BRIC countries, particularly China.

Will the Chinese buy into a shaky insurance fund? Perhaps, but they might want guarantees from the ECB.

The bottom line is that because Germany has once again rejected the principle of the ECB acting as lender-of-the-last-resort, what we are left with is an undercapitalised, risky and probably ineffective EFSF insurance company. Centre-right governments in Germany, The Netherlands and other northern European countries continue to serve up reheated ‘Washington consensus’ ideology according to which Central Banks must focus exclusively on inflation targeting.

Only the ECB has the firepower to destroy the vicious circle created by the bond markets, namely, that by driving up borrowing costs because of default fears, they raise the probability of default actually happening.

At the moment, the ECB is hesitantly buying bonds to prevent meltdown. Were it to announce it would guarantee all new sovereign bonds, or better yet, issue its own jointly guaranteed bonds, the downward spiral of the eurozone could be reversed overnight.

But then as Keynes famously warned:

“Madmen in authority, who hear voices in the air, are distilling their frenzy from some academic scribbler of a few years back.”

• Progressive politics and the purple peril: The rise of UKIP – Ford and Matthew Goodwin, April 17th 2011

8 Responses to “Why the latest euro deal won’t work”