Ben Mitchell gives readers a primer on the state of Belgian politics, 485 days after their election - with a government finally in sight. 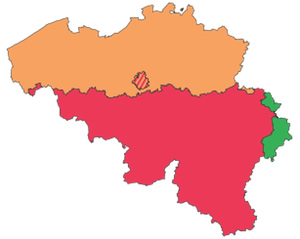 It’s only taken 485 days, and seen world records tumble, but at long last Belgium has moved a decisive step closer to forming a government. This week agreement was finally reached to overcome a series of seemingly intractable problems which have dogged its politicians since June 13th 2010, the date of last year’s general election.

Belgium has been without a permanent government since then, and whilst it may be several weeks yet before a new government is actually sworn in, much of the hard work has been done.

Many of the stumbling blocks preventing its formation existed well before last June, indeed some have plagued Belgium for decades, but the results of the election caused them to resurface.

This YouTube clip might help explain things a little more with its light-hearted look at Belgium’s baffling political structure.

An impressive showing by the Flemish separatists (although they often refer to themselves as nationalists as a way of softening up their image), the New Flemish Alliance (N-VA), led by the portly figure of Bart De Wever, ensured that the divide that has never been far from Belgian politics came to a head once again.

De Wever, a man who once said:

“…I’m not working toward the immediate end of Belgium. And I don’t have to do that, either, because Belgium will eventually evaporate of its own accord…the nation of Belgium has no future in the long run.”

So, what exactly is this divide? And how has it come about?

Belgium, a country of some 10.7 million inhabitants, is predominantly split between two main communities: the Dutch-speaking Flemings in the north, Flanders, and the French-speaking Walloons in the south, Wallonia. There are also a nominal 70,000 German-speakers tucked away in the corner of Wallonia.

The present crisis can be traced back to the 1960s when the country moved from having just a single central government to having several. A series of constitutional reforms saw power devolved to the three different communities, which were drawn up along linguistic and cultural lines to represent the French, Dutch and German-speakers of Belgium.

Towards the end of the 1970s/beginning of the 1980s, regions were formed: Wallonia in the south, Flanders in the north, and the capital, Brussels. The latter is significant since it finds itself in Flanders, but is not actually part of Flanders. Officially bilingual, the overwhelming majority of the population of Brussels are now French-speakers.

The result was a country without national political parties but a series of community-based ones with their own separate parliaments, on top of a now emasculated central government.

Disputes over how much power each one should have have rarely been far away, and have only been accentuated with the rise of the Flemish nationalists, resulting in last June’s stunning election victory for the N-VA; a victory achieved by cynically playing communal politics, clinging to a reality which holds that:

“…Belgium is made up of two societies, in which a thrifty, centre-right, Dutch-speaking north should no longer have to subsidise a poorer, welfare addicted French-speaking, socialist south.”

Figures confirm that unemployment in Wallonia, currently at 13%, although steadily falling, is more than double the rate of Flanders, at just over 6%. But it should be noted that:

“…unemployment in Wallonia is mainly structural, while in Flanders it is cyclical.”

Yet, this wasn’t always the case, with Wallonia being the economic powerhouse until the 1960s. And Walloons will argue that today they are helping to fund a pension system which accommodates a rapidly ageing Flemish population.

However, Wallonia is now seen as one of the poorest regions in Europe and has suffered significant job losses over the years in much the same way that the north of England has with a loss of much of its heavy industry.

The political impasse of the last 16 months also concerns a wider political (together with the country’s linguistic one) divide , and this has been played out at the ballot box, with Flemings tending to vote for right of centre or right wing parties, and the Walloons favouring left of centre or left wing parties.

Whilst the nationalists and De Wever were the biggest winners in the north last year, the socialists, led by the bow-tie wearing Elio Di Rupo, came out on top in the south. The two were initially charged with working together to form a government.

Over the last year, this has seen De Wever call for a complete reform of the state, including steps to tackle its structural deficit, and crucially, a demand for even more autonomy to Flanders.

When no compromise was reached, N-VA dropped out of the negotiations, leaving Di Rupo to continue to find a solution with the remaining eight (yes, that’s right, eight!) other political parties. And this week a deal has finally been reached, with a new government expected to follow shortly.

Key to the reforms sees even more powers transferred to the regions away from the federal government, although not nearly as much as the N-VA had wanted. Other agreements centre on changes to the finance law, with regions getting greater tax autonomy and, most crucially, the splitting up of Bruxelles-Hal-Vilvorde (BHV), a district in the Brussels suburbs, and a thorn in the side of politicians since its formation in 1963.

So, what does this all mean for the future of Belgium?

The reforms reached this week, hailed as “historic” by all sides, have been described as the biggest changes to the country in a generation. The hope is that it will go some way to satisfying the nationalist appetite of the north, whilst preserving Belgium as a single entity.

It should also put an end, for now, to the endless debates about whether Belgium is about to split.

What appears more likely is that Belgium has moved ever closer towards the Swiss system of self-governing cantons.

• Scottish independence: time for a homage to Catalonia? – Rob Marchant, May 14th 2011