One year on from the Emergency Budget and the Spending Review, it is becoming abundantly clear the coalition government’s austerity plan - Plan A - isn’t working. 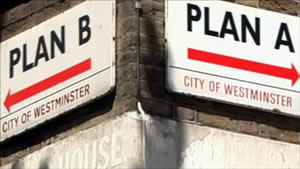 One year on from the Emergency Budget and the Spending Review, it is becoming abundantly clear the coalition government’s austerity plan – Plan A – isn’t working.

Economic growth has been negligible for most of the past year, and it is likely that new GDP data released this week will show the economy slipping back into recession after the weakest recovery on record.

Unemployment is rising sharply, with catastrophic implications for young people in particular.

The UK is now crying out for an alternative to Plan A – and the Plan B report (co-edited by Neal Lawson and myself; pdf), launched by Compass today, with contributions from a wide range of left-leaning academics and policy experts, aims to provide the first steps towards a viable alternative political economy.

Plan B has two main purposes. The first is to expose Plan A as a recipe for economic disaster for the UK, based on a false set of economic assumptions that the Conservatives, and their allies in the Liberal Democrats, are using to deceive the British public in several ways – for example by the entirely false assertion that the UK is “bankrupt” and has “maxed out its credit card”.

This rhetoric is being used as cover for sweeping cuts in public spending which – as we show using recent research from expert bodies such as the IMF and NIESR – are likely to fail to reduce the deficit by anywhere near as much as the government hopes, and could even increase it.

After demonstrating why Plan A is likely to fail, the report goes on to outline the alternative – Plan B.

In the short run Plan B focuses on measures to stimulate economic recovery and stave off a double-dip recession including using quantitative easing to fund a “green New Deal” of investments in energy efficiency, and increasing benefits and tax credits for the poorest groups who are most likely to spend the extra cash (an approach which would have the beneficial spin-off of also reducing poverty).

In the longer run, a wider range of policies is needed to ensure the UK does not simply return to the unsustainable economic approach of letting the City rip and inflating economic activity with household debt bubbles that characterised our economy prior to the crash of 2008. Instead, we need to accept the systemic challenges of climate change, peak oil and a broken financial system, and bring about a fundamental transformation of our economy.

Plan B makes detailed recommendations on a number of areas of economic policy which are fundamental to the UK’s future economic and social development.

For example, on financial reform Plan B argues future stability requires better regulation of the banks and encouragement for them to invest in the real economy.

For this to happen we need a number of reforms including:

• The full separation of utility and investment banking;

• Measures to tackle excessive pay and bonuses in banking that lead to excessive risk taking;

• Increased competition in the sector and much higher customer standards; and

Other economic policy areas covered in Plan B include:

• A fairer tax system in the long run, closing the £70 billion ‘tax gap’ with a range of measures that include the introduction of a general anti-avoidance principle to tax law and a tax on unearned land value increases;

• A new investment programme for British industry based around measures to encourage innovation, and a British Investment Bank to invest in key sectors such as transport and renewable energy;

• Using public spending on social security, education and health to prevent problems down the line rather than just treating symptoms – for example relatively small investments in policy for transport and diet could save money, increase well-being and reduce carbon emissions;

• Moving to an economic approach based on a shorter paid working week which allows the ‘core economy’ of the human resources that support caring for each other, social networks and civil society to flourish and grow;

• Policies to increase the wages of lower and middle-paid workers relative to top earnings and to encourage companies to give their staff increased voice and influence in the workplace harness their ingenuity and commitment.

Plan B is just a first step and there is much more to do to scope out the details of an alternative vision for the British economy.

But this report certainly shows there is an alternative – not just to cuts, austerity and stagnation, but to a return to business as usual and all that means for growing inequality, climate change and people’s well-being.

Plan B shows we can have a good economy for a good society.

28 Responses to “With Plan B, we can have a good economy for a good society”