New analysis shows the economy’s struggle to get back to its previous peak, which took place in Q1 2008, will take longer even that the Great Depression. 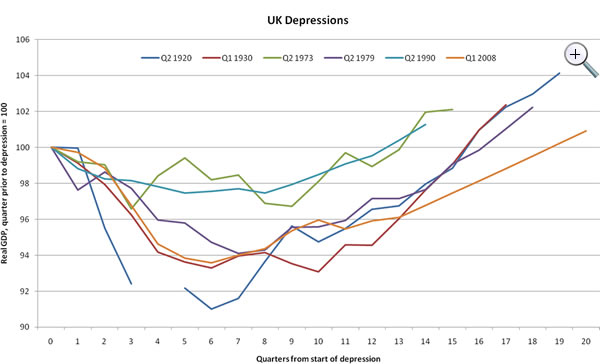 The UK’s recovery is set to be the longest since records began. New analysis shows the economy’s struggle to get back to its previous peak, which took place in the first quarter of 2008, will take longer even that the Great Depression.

Nearly four years since the recession started, the UK economy is still four per cent below its previous peak. Using optimistic projections from the OBR of 0.7% growth per quarter, Britain would still face a further year and a half before the level of economic activity returned to its peak at the start of 2008.

As reported in today’s Mirror, in the 1930s, the economy returned to its previous peak after 16 quarters (four years). But it is set to take at least 19 quarters (just under five years) to do the same this time. If growth falls further, as many are predicting, or Britain hits a double dip recession, the slump could be even longer lasting.

The present recovery will also be far slower than following the recessions of 1973, 1979 and 1990, as the graph below shows:

Despite leaving three million unemployed, the 1990-92 recovery took a relatively quick 13 quarters before output returned to its previous peak. The 1973-76 recovery was completed in 14 quarters while it took 17 quarters to complete the 1979-83 recovery following the austerity of Geoffrey Howe’s 1981 Budget.