Martin McGuinness has been confirmed as Sinn Fein’s candidate in next month’s Irish Presidential elections, and has been busy rebranding himself as a statesman. 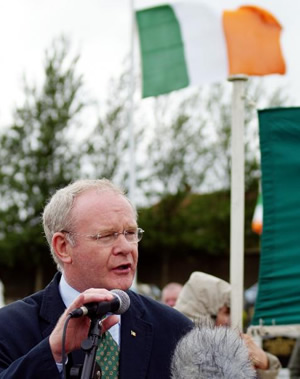 In his reaction to the formal announcement that Martin McGuiness is to be Sinn Fein’s nomination in the presidential election in Ireland next month, the DUP’s Gregory Campbell has argued that if Sinn Fein were to see its share of the vote increase in the elections it would send a message that Roman Catholics south of the border had simply forgotten a host of tragic events with which McGuniess had been associated.

“In the unlikely event that he were to be elected as the Irish Republic’s Head of State would he, when meeting the Queen, take the opportunity to apologise for the IRA’s murder of her cousin Lord Mountbatten in 1979 when Martin McGuinness would have been an IRA Commander on the ground?

“Mr McGuinness has previously displayed a memory recall moment when he suddenly remembered meeting the Priest at the centre of the Claudy bomb attack after saying he had never met him, perhaps he will recall the Mountbatten murder occurred on the same day as 18 soldiers were murdered in Warrenpoint here in Northern Ireland.

“The relevance to Unionists in Northern Ireland of this election will at least be crystalised as, for a number of years we have been told that the people in the Republic have no interest in Northern Ireland, now we will have the chance to see if that is the case.

“If on the other hand there is an increased vote for SF then we will know that Roman Catholic voters there, as here in Northern Ireland, forget the past in order to vote for a future that will never arrive.”

Painful though the past undoubtedly is, McGuinness goes into the relatively short period of election campaigning he has ahead of him having come out with some quite extraordinary statements in an effort to model himself as a statesman, able to heal rather than re-open the wounds so vividly described by Mr Campbell.

Earlier this month, using a speech to Sinn Fein’s annual conference, he declared that unionists should be “loved and cherished”.

Expanding on the point he said:

“I see unionists as brothers and sisters to be loved and cherished as we continue to develop a genuine process of reconciliation on our journey to the New Republic.”

His remarks then came just a day after history was made when the Presbyterian minister, Reverend David Latimer became, the first protestant to address the conference, dubbing McGuiness:

“One of the great leaders of modern times.”

And since his selection as Sinn Fein’s candidate for President, McGuinness has sought to rise above party politics, pledging to serve as a “people’s president” who would be prepared to meet the Queen as one head of state to another.

Undoubtedly words on their own will not heal the deep wounds and anger that remain towards McGuinness within much of the unionist community, but they do represent a remarkable turn around and a significant milestone in the maturity of the peace process.

But if the past is to teach us anything it is that the memory of those of all faiths and none who found themselves victims of the troubles is best marked by ensuring a political climate in which the central theme of debate is not sectarian divisions, but looking towards a future in which bread and butter issues such as the economy, health, education and transport are key, a future of normality.

As Desmond Tutu, someone who played such a pivotal role in healing the wounds left by apartheid South Africa, concludes:

“Forgiving is not forgetting; it’s actually remembering – remembering and not using your right to hit back. It’s a second chance for a new beginning.

“And the remembering part is particularly important. Especially if you don’t want to repeat what happened.”

10 Responses to “Irish Presidential elections: Martin McGuinness to stand, but can he win?”