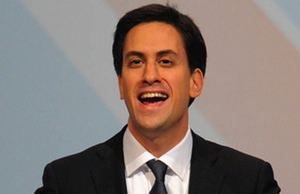 There’s room for improvement, but rhetorically, Ed Miliband’s party conference speech was better than many of his previous speeches.

Party conference speeches are especially hard to write because as well as all the usual requirements of a speech like tone, pacing, and imagery, you also have to address all the issues so that nobody feels left out. Hardest of all, you also have to formulate and articulate a ‘big argument’ for why you are doing everything you are doing.

Rhetorically, he is improving. All persuasive language must appeal to one of the five senses, and the easiest way to do it is by painting pictures for the listener. This was something lacking from many of his previous speeches, but he’s getting better at it.

A year ago he’d have just talked about the rioters and the clean-up in abstract terms; this time he talked about “the young people with the brooms.

On welfare, he talked about:

“The single mum working as a dinner lady who loses help with her childcare.”

And rather than trotting out the tired phrase about the NHS being ‘free at the point of use,’ he talked about how nobody asked him for his credit card at the door.

The central issue of the Parliament, of course, is the government’s economic plan to cut the deficit. This is tricky rhetorical territory, because to connect, a speech has to evoke an emotional reaction. Economic language – words like ‘governmnent spending’, ‘deficit’ and ‘interest rates’ don’t. It’s also tricky because the economic arguments are complicated, but a party leaders’ speech has to make them simple.

The speech solved this problem in the right way: by reaching for one of the most important tools in the speechwriter’s toolbox: an analogy. He compared paying down the deficit to paying off your credit card. He argued that the Tories want to pay it off as fast as possible, while Labour are the only party to see that you can’t pay it down as fast as possible if you’ve lost your job.

This was a good effort: it more or less matches the situation, everyone can relate to it, and it is an analogy which presents Labour’s stance – calling for slower repayments until you’re safely back in work – as common sense.

But it fell short in one vital way. It made the government’s plan look better than it is. It’s not just that this is a bad time to pay down the deficit as fast as possible. It’s that doing so actually puts more people out of work. Whether it’s by sacking people, cancelling contracts, or ending productive stimuli. That’s something which the credit card analogy doesn’t capture.

I’d have recommended a patient-doctor analogy. The patient – our ailing economy – spent the last financial year on the life support of government spending. The private sector wasn’t growing enough on its own. Labour believes that the problem is that the patient can’t yet survive by itself, so wants to nurse it back to health.

Whereas Osborne thinks that the problem is that the patient is on life support, so his solution is to yank the life support of public spending out of its arm, and of course, the economy weakens. Where Labour would nurse the patient back to health and reduce public spending once it is back on its feet, this government thinks that cutting spending as fast as possible will get the economy back on its feet by itself.

Sadly, history suggests otherwise (pdf). The lesson from Australia, Belgium, Denmark, Ireland, Portugal, and Sweden in the eighties and Finland, Germany, Italy, Japan, and the US in the nineties is that the more money the government takes out of an economy, the more the economy shrinks. The credit card analogy was good, but an analogy which reflected how the government is actively harming the economy would have been better.

Ed’s speechwriting team still need to improve his speeches’ pacing and emotional shape. This speech had one tenor. Urgent. Imploring. Entreating. Short sentences. Like someone who’s a bit hacked off. For fifty minutes. In the same way that getting an email written all in capital letters turns you off, listening to someone speak for forty minutes in only one register also turns us off.

He should take the tone down sometimes for some descriptive passages. The passage which cried out for this was the autobiographical part. Part of winning the right to be heard by the electorate is letting voters get to know you. “What’s my story?” he asked at one point.

Perhaps a more confident speechwriter would have taken some time at that point to take down the pace and woo us by painting some verbal pictures, to actually tell us a story.

But instead we got this:

“My parents fled the Nazis. They came to Britain. They embraced its values. Outsiders. Who built a life for us. So this is who I am.”

That’s a missed opportunity for a beautiful passage.

The next level up from that is tying your story into your message. That’s difficult, but done well, it lends a speech a unifying theme which gives it much more power. He hinted at that with the idea that he comes from a family of outsiders, which is why he wants to break the ‘closed circles’ of Britain, which is a good start. He should have developed it by illustrating his family’s belief that their outsider status wouldn’t stop them from integrating into some of the closed circles of British society.

Did Miliband Senior ever believe, in his furniture moving days, that any son of his could become the leader of the Labour party? Did a navy recruiting officer ever tell him that the proud British navy could do without refugee European Jews?

We’re into the realm of autobiography here, but it shows why a politician who has taken the time out to mould their life story into an eloquent argument for their core beliefs approaches big set-piece speeches like this with a considerable advantage.

Finally, the speech also succeeded in that it had a big overarching argument: that the system has failed because for decades this country has failed to distinguish between the companies who create wealth and those which destroy it. The strength of this argument is that it taps into the public sense that after a crash in which so many businesses which exist to create wealth managed to destroy so much of it, the government can’t carry on treating all business the same.

This is long overdue. I used to cringe whenever Labour talked about ‘business,’ – a term that lumps together the trader of toxic mortgage-backed securities which he doesn’t really understand with greengrocer, or Alessio Rastani with Richard Dyson. Lumping all business together discouraged Labour supporters from thinking about what any given business actually does.

When Labour people criticised the wealth-destroying activities of rogue traders by calling them ‘business,’ they alienated all small business owners, or for that matter supermarket checkout workers or security guards or immigrants, or anyone, like me, who has ever aspired to start a business. That’s a lot of potential votes. The failure to make the distinction between productive and unproductive business has harmed Labour, just as it has harmed the British economy.

The disadvantage of Ed’s big argument, of course, is that it invokes the idea of Ed Balls picking his way through the 4.5 million-odd list of companies registered at Companies House, and declaring some ‘good’ and others ‘bad’. That’s an own goal. Having governments treat companies differently on an individual basis invites cronyism, corruption, uncertainty, and makes a country a dismal place to do business. Ask Argentina.

He should have argued that the tax system should incentivise not wealth-creating companies, but wealth-creating behaviour. Perhaps he could have mentioned long-termism, transparency, and decent training in this section. At least, the details should have been available in a separate document; the party conference speech is not the place for them.

But all in all, there will always be room for improvement, but it was a good speech. It spoke to the public and the party. It contained a big argument. It painted pictures. It used analogies to make tricky arguments. In short, it was better than many of his previous speeches. Let’s hope they continue to improve.

21 Responses to “Slowly but surely, Ed’s speeches are getting better”