Another day, another humiliating u-turn from Team Murdoch - Rebekah Brooks, who has clung on as News International chief executive, has resigned. 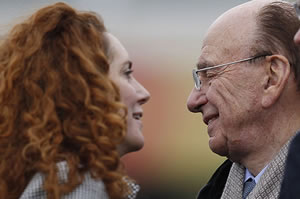 Another day, another humiliating u-turn from Team Murdoch – Rebekah Brooks, who has clung on as News International chief executive, has resigned. She says the resignation makes it possible for her to give “full cooperation to all the current and future inquiries, the police investigations and the CMS [culture, media and sport select committee] appearance”.

Only last night, News Corp’s second biggest shareholder, Saudi billionaire Prince Alwaleed bin Talal, demanded she get the boot, while Rupert Murdoch, in an interview with his own Wall Street Journal, claimed Brooks and his son had handled the crisis “extremely well in every way possible”.

Murdoch also said the company had made only “minor mistakes”, adding that it was “important to absolutely establish our integrity in the eyes of the public” – paving the way for Brooks to be resigned.

Meanwhile, the net continues to close in on Murdoch in the States, with it emerging last night that the FBI was investigating the alleged hacking of the families of 9/11 vicitms. In addition, US legislators are looking into the possibility that News Corp has broken the Foreign Corrupt Practices Act and the Wiretap Act.

“He has already appeared before the Commerce Committee on other matters, yeah, he’s an American corporation, he’s an American citizen, depending on how this goes, I’ve spoken to chairman Rockerfeller, and it is possible that we could call him, we are not ready to do that at this time, but the FBI is focused in on this. I have to say, it’s just hard for me to understand how anybody could sanction, how anybody could sanction doing some of the things they reportedly did…

“This is a public corporation, they sell shares, if they hid payments, bribery payments from shareholders, that’s a whole other civil penalty, and then if they hacked in to phones, without a warrant, obviously they didn’t have a warrant, that’s criminal, and the Foreign Corrupt Practices Act could be civil, it could be criminal, so lots could happen, and the FCC has the ability to take away a licence from a media corporation that breaks the law…

“If you break the law in our country, whether you’re a Republican or a Democrat or a liberal or a conservative or a moderate, if you break the law, you pay the price, that’s as simple as it gets, it’s nothing to do with your political persuasion.”

We will have more on the latest dramatic revelations in the phone hacking scandal later today.