An exclusive new opinion poll suggests there is strong public appetite for further action to be taken against the Murdoch ‘empire’, writes Neil Foster. 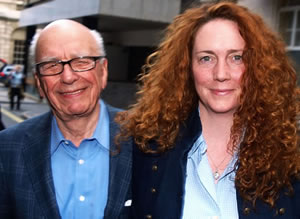 In what has been an extraordinary week with dramatic success for thousands of campaigners – the latest development being today’s long overdue resignation of Rebekah Brooks – an exclusive new opinion poll suggests there is strong public appetite for further action to be taken against the Murdoch ‘empire’.

Fresh findings by pollsters Survation illustrate a real eagerness amongst the public to restrict the existing presence of News International and reduce the influence of Rupert Murdoch within British political life.

In response to recent allegations and emerging evidence of phone-hacking and widespread invasions of privacy, an overwhelming 80% demand a review into News International’s existing levels of media ownership in the UK.

This provides a once in a generation opportunity for politicians to change the balance of ownership of British media for good and to end the accumulation of so many media outlets by one firm and one family.

“A cynical move by Rupert Murdoch to reduce reputational and legal harm to News International.”

Furthermore there is great sympathy with the former workforce of the NotW. Seventy nine per cent of respondents believe it is unfair that they have been made redundant while News International’s executives (up until this morning in the case of Brooks) have kept their jobs.

Seventy eight per cent believe senior executives were in fact aware of the alleged hacking of Milly Dowler’s mobile phone.

More than half of voters polled (53%) believe companies currently advertising in other News International titles such as The Sun and The Times should now suspend their advertising until the accusations have been fully investigated. If a sustained boycott took place on this scale it would raise serious questions as to how Rupert Murdoch could effectively continue to own any British newspaper in the medium term.

With such strong public feeling, advertisers that ignore this may well risk contaminating their brands by continued association with News International titles.

Turning to the politicians, David Cameron has fared worst of the three main political leaders at Westminster in how they have responded to the scandal. According to those polled, 56% believe he has:

“Handled the controversies over hacking badly.”

Perhaps more serious is the finding that 67% believe the prime minister’s relationships with News International, Rebekah Brooks and Andy Coulson have affected his judgement. In contrast, 66% believe Labour leader Ed Miliband has handled the issue either well or adequately with 46% feeling the same about deputy prime minister Nick Clegg.

With Rupert and James Murdoch facing MPs on Tuesday, what message could British politicians be giving them on our behalf? Whilst the public will welcome the withdrawal of the BSkyB takeover bid, this is insufficient given the scale of uproar at such widespread and repellent revelations. Voters demand a significant review of media ownership laws.

Members of the select committee should tell Rebekah Brooks that as a consequence of activities on her watch there are now serious question marks over the ownership of existing News International titles in Britain.

MPs could remind Rupert and James Murdoch of the full extent in which the News International brand is mistrusted and at risk of a further advertiser boycott. A significant majority of voters are likely to be unforgiving if there was an attempt to introduce a new Sunday news title any time soon.

The wider political conclusion is that the prime minster has so far been vulnerable to the serious charge of ‘compromised judgement’ as a consequence of his close associations with senior News International figures and his appointment of Andy Coulson.

As a consequence, it falls to Labour and to the Liberal Democrats to make the political weather on a substantial review of media ownership in the UK. They should do it swiftly and in the knowledge they carry the country’s overwhelming support.

Notes on Survation’s methodology can be found here; we will link to the full tables when available.

94 Responses to “Poll Exclusive: 4 in 5 voters want a review of all Murdoch media outlets”