The head of the Institute of Directors in Wales says that though we're not back in recession, with the dismal growth we’ve seen “it might feel as though we are”. 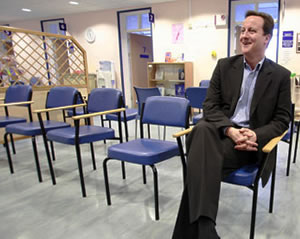 As the Office for National Statistics published what Kevin Meagher described today on Left Foot Forward as “dismal” growth figures, David Cameron has sought to use a visit to Wales to accentuate the positives in a move that can be seen as optimistic at best.

As economic growth was registered at just 0.2 per cent between April and June, rather than contrition, the prime minister, speaking at a training centre in Caerphilly, argued:

“I’m not saying it’s easy. Of course it’s never easy, but if you give people the skills and the confidence and the help there are jobs, they can work and that’s good for them.”

“I think we should be positive because the economy is growing and Britain is growing and more people are in work than a year ago. Clearly we are, if you like, some stability in a very uncertain world.”

His words, however, will be seen as somewhat hollow and overly positive, with Robert Lloyd Griffiths, director of the Institute of Directors in Wales, saying:

“We’re not back in recession but with numbers like these it might feel as though we are. As I travel around Wales, IoD members tell me the situation remains precarious and uncertain.”

Furthermore, PriceWaterhouse Coopers has itself argued that Wales faces growth that lags behind the rest of the UK, predicted to be just 1.1% by the end of the year, and just last week, Left Foot Forward reported on the ONS figures that showed Wales has suffered most in terms of unemployment during the recession than any other nation of the UK.

“These figures clearly show the UK economy is still very weak. It shows that the level of GDP is only slightly higher than it was in the third quarter of 2010 meaning that the UK economy has effectively stalled over the last nine months. This underlines the impact the UK government’s spending cuts are having on the country’s ability to emerge from the global economic and financial crisis.

“We have made it clear that we are committed to working with UK Ministers – and doing what we can in Wales to create the right opportunities for private sector companies to thrive and grow.

“For example, in order to extend opportunities for young people we have today announced a new £15 million scheme to target 4,000 young people across North West Wales who are at risk of falling out of school or further education.

“While we are committed to getting people into jobs, and trying to keep people in their jobs, the UK government’s decision to cut public sector jobs in Wales severely undermines our efforts.”

7 Responses to “IoD: Wales feels like it’s back in recession”