Richard Miller, Executive Director of anti-poverty charity ActionAid, on how the international community could have done more to forsee the Horn of Africa emergency. 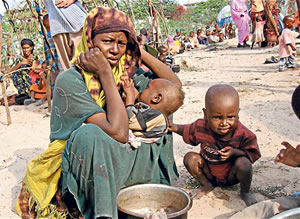 Richard Miller is the Executive Director of anti-poverty charity ActionAid

Some 10 million people are on the brink of starvation because of the severe drought across Kenya, Ethiopia, Somalia, Uganda and Djibouti. With two disastrous rainy seasons producing the driest conditions in 60 years, the widespread crop failure and livestock death has resulted in a severe food crisis.

Hardest hit are the most vulnerable – women, the elderly and the youngest – including an estimated 250,000 seriously malnourished children. As is often the case with slow onset disasters such as drought, we think the international community has been too slow in providing sufficient funding for a humanitarian response.

The UK’s announcement of £38 million for Ethiopia is welcome, but ActionAid is calling on other donors – both European and international – to come forward with similar funding pledges for the entire East Africa region in order to prevent this crisis becoming even worse. ActionAid has been responding to the crisis for several months and has already helped more than 194,000 people with emergency food supplies, water and income generating schemes.

But we have now launched a £1.5 million appeal of our own to urgently step up our work in the region. In Kenya alone, approximately 3.5 million people are thought to be in need of humanitarian assistance.

We are on the brink of a catastrophe for millions of people unless we urgently get funds to step up our work. We know that some families are eating only one meagre meal a day and children are dropping out of school to help their families search for water. The extra £1.5 million will enable ActionAid in Kenya to help thousands more people by providing communities with desperately-needed food and water.

It will also support farmers in the area to ensure people can recover from this disaster in the long term.

• You can donate here.