Labour needs to have an independent voice on Greece; the party's internationalism puts it on the side of the Greek people, writes Labour MP Barry Gardiner. 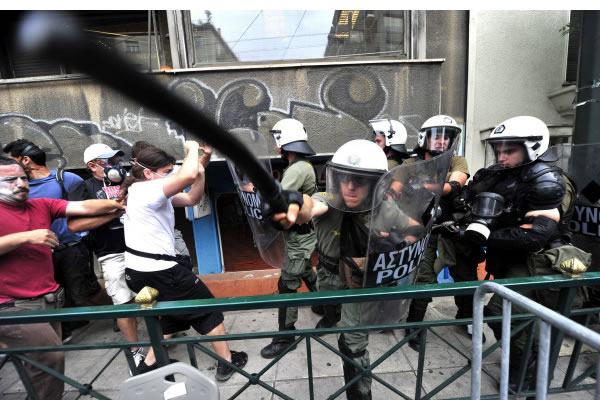 Labour needs to have an independent voice on Greece. Our internationalism puts us on the side of the Greek people. Our socialism should make us suspicious of the bankers. Yet we appear to be colluding in the destruction of Greek society despite the sure knowledge that the Greek economy has failed and is beyond recovery.

Europe’s politicians are in denial. They insist Greece cannot be allowed to default, yet they know the €60.5 billion of Greek debt held by the private sector falls due within the next three years. The Greek Parliament may have voted to accept the austerity package in order to get the international bailout, but the truth is this does not make Greece’s debt any more sustainable.

With negative GDP growth of minus 2% in 2009, minus 4.5% in 2010 and minus 3% projected for this year, what Labour and the rest of Europe should be asking is why on earth Germany and France seem so keen to keep Greece within the European Monetary Union. The answer is as simple as it is uncomfortable: the bulk of Greek Sovereign debt is held in French and German Banks.

Michael Cembalest, the global head of investment strategy at JPMorgan Asset Management pointed out last week that the rollover proposal is:

“…mostly designed to continue transfers from European Union taxpayers and the International Monetary Fund to French and German banks, and to buy some time – perhaps a year or so.”

But buying time is not what Greece needs. What it needs is to be allowed to leave the euro, default and restructure.

For each €100 of debt maturing in the next three years, if the banks agree to roll it over instead of calling it all in they will keep €30 in cash, Greece will receive €50 in exchange for the 30 year rollover bonds and the remaining €20 would be placed into an SPV (Special Purpose Vehicle) that will acquire top rated bonds to guarantee the total of €70 out of the original €100.

The accumulated interest rate Greece will pay for the use of this €50 will be approximately 11%. No serious investment house believes this is sustainable. But this is not Greece’s only problem with this proposal. If Greece were to raise the €30 billion it needs at a rate of €50 in every €100 this would require every single one of its 60.5 billion euros to be rolled over.

Agreement to this from all the current debt-holders is highly improbable.

Even if they did, Greece is going to lurch from quarter to financial quarter waiting to see if the rest of the EU will agree to stump up the next instalment of the bailout. This is no way to run a stable currency and Europe’s politicians ought to start accepting the consequences. If it looks like a default and it behaves like a default then it should be treated like a default and Greece should be allowed to secede from the monetary union in an orderly fashion.

The Greek economy needs restructuring and a return to the drachma will enable this to happen in the normal way through a proper devaluation.

For the French and German banks that are the largest holders of Greek debt, their national governments, who currently prefer to give the money to Greece, should instead limit the damage to their own banks. If they fail to do this now they will only find that both Greece and the banks are brought down within the next three years. That would be a far more damaging event to European stability and growth.

British taxpayers are not immune from the financial pain of continuing to pour bad money after good. For all that David Cameron boasts Britain will not be part of the eurozone package, the truth is that Britain is about to double its contribution to the IMF to £20 billion per year.

The bulk of these funds will be lent to Greece as part of the bailout. British politicians should be saying now to the IMF that the loans must stop. Loans should only be made where there is confidence the money can be repaid. With Greece no such confidence can reasonably exist.

The Labour Party should not be following Cameron and the European consensus on this issue. It is a consensus of fear amongst politicians paralysed by a situation they are simply wishing will go away. It won’t. The effects of delay in recognising Greece’s default and in addressing it are potentially disastrous. Labour should say so clearly.