US State Department cables leaked by WikiLeaks have alleged that the DUP and Sinn Fein held discussions far earlier than their official first talks in 2007. 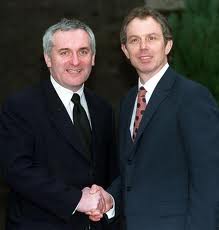 The latest round of US State Department cables leaked by WikiLeaks have alleged that the DUP and Sinn Fein held discussions far earlier than their official first talks in 2007, when forming a government in Stormont.

According to the Belfast Telegraph which has carried details of the leaked US embassy briefings to Washington:

Detailing what was likely to be the basis of the above discussions, in a document dated 14th October 2004, the US embassy’s deputy chief of Mission, Jonathan Benton wrote:

“The Irish say it is time for both parties to show what is on offer, and then to see if they can come to terms on a comprehensive package, including modalities of decommissioning, DUP commitments on devolution and policing, and the issues surrounding how the institutions would work. Substance would be agreed first, then sequencing and a time line.

“Irish officials believe the elements of a deal are achievable, but caution that it always comes down to political will.”

The revelations build on similar ones made in the Guardian in December.

That said however, while Sinn Fein have refused to comment, the DUP has issued a vehement denial of any suggestion that talks were taking place before the two parties joined forces in government in 2007.  A spokesperson for the party argued:

“Prior to the St Andrews talks, the DUP participated in discussions with government ministers and officials who in turn met other parties. During these discussions papers were exchanged and shared with other parties. This was public knowledge.

“The party was not involved in any negotiations or direct meetings with Sinn Fein before the weekend of March 24, 2007. Furthermore, no individuals representing the party were engaged in meetings or discussions of this nature.”

The anti-agreement leader of the Traditional Unionist Voice, Jim Allister however disagrees, accusing those who he suggests were engaged in discussions of an effective cover up.

Meanwhile the leaked cables also suggest that the then Taoiseach, Bertie Ahern, was seriously considering taking back his country’s relinquishing of its constitutional claim on the North in frustration at the DUP’s refusal to implement the Good Friday Agreement – in part as a way of boosting his nationalist credentials ahead of the 2007 general elections – a move that the US Embassy argued would have been “stunning” for all the wrong reasons.

In a memo to the State Department drafted in 2006, the embassy explained:

“The Taoiseach said that if the DUP did not engage in the process, he would consider giving a speech in which he reminded people that the Republic of Ireland had changed its constitution to relinquish its claim to Northern Ireland only on the basis of the promise of the Good Friday Agreement,” he wrote.

“If that promise is not met, he said, he would indicate that Ireland could consider changing its constitution again.”

Whilst discussions over the ethics of WikiLeaks operations will continue to rumble on, it is clear that without them there is no way we would ever have come to understand just how fragile the peace process was behind the scenes.  As an editorial for the Belfast Telegraph argues:

“The value of these leaked confidential documents is that we, the ordinary public, get to see information which would otherwise be locked away for decades. They let us see that even momentous events of state or historic decisions can hinge on the most tenuous of circumstances. While we believed that the power-sharing deal was carefully orchestrated and choreographed it now appears that the process was very fragile and could easily have broken down.

“The cables disclosed today, and previously, show that modern history is sometimes dependent on happenstance and luck as well as the will of the participants to make things happen. Personalities as well as policies play a dominant role in the decision making and the public faces of the movers and shakers in society are often very different from the way they behave behind closed doors.”