Ben Fox berates the eurozone for dithering and duplicity over the Greek debt crisis and asks which of the available options are best for Greece. 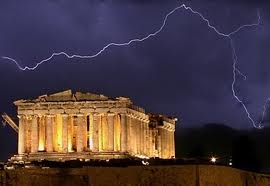 The Greek debt crisis seems to be finally coming to a cathartic conclusion. That it has taken so long for Europe’s leaders to admit that Greece could not meet the punishing terms of its ‘bail-out’ conditions without further cash injections, or a re-profiling of its debt, is quite disgraceful.

It surely did not take an economic genius to guess that a 25 per cent cut in public spending would do nothing to boost the Greek economy, nor that a lax tax regime would suddenly start raking in higher revenues or that a relatively closed labour market would suddenly become North European.

So what are the options and which one is best for Greece?

The first thing we can rule out is more of the same, i.e. another bail-out with a high interest rate. As the past year has shown this would simply not work and would further cripple Greece and make a default inevitable.

Should the holders of Greek paper be forced to take a haircut on their holdings? On the surface this seems fair enough – banks ploughed billions into buying Greek government debt on the assumption that the EU would never allow one of its member states to default on any of its debt, and it is right that they should share the pain.

However, this would almost certainly lead to a ‘credit event’ – and credit rating agency Fitch has already said as such. Banks across Europe, particularly French and German institutions, would need to be re-capitalised and many of Greece’s banks would go bust. Moreover, the markets would panic and the threat of contagion to the likes of Spain and Italy would be a terrible risk.

The same is true but to a far greater effect if Greece is simply allowed to default on its debt. Greece’s debt is around £300 billion, but we also have the factor in the impact of a government default on Greek commercial debt and derivatives. The fallout of a default would make the post-Lehman Brothers crisis look like a tea-party.

Another alternative is to provide a further bail-out with few strings attached and to re-negotiate the terms of the existing bail-out. This could require institution to agree to lengthen the maturity of the debt and to reduce its cost. Greece would still have to pursue its €50 (£44.65)bn privatisation programme and take the steps to improve labour market flexibility and tighten its tax regime.

Which is the best option for the Greek people? Pundits and politicians from the left and right have started to call for a default – the Guardian’s Larry Elliot and Boris Johnson being the latest. Indeed, according to the mayor of London, a default would allow Greece to leave the euro and go back to the Drachma, devalue the currency and pursue an export-led recovery. It would also allow the Greek government to take back control of its economic policy.

It sounds good but it is economically implausible. As mentioned above, a default would bring the Greek banking sector to its knees. Furthermore, the Greek labour force is so uncompetitive that only a massively devalued Drachma would allow them to move towards a current account surplus.

Forcing creditors to take a haircut of between 25-50 per cent on their holdings would be better for Greece. It would bring Greece’s debt under control. But, on its own, it would not solve the structural problems in the Greek economy. The truth is that it will take years for Greece to make the internal corrections to improve the competitiveness of its labour market and the efficiency of the state. Quite simply, there is no quick fix for Greece.

Nor for that matter, is there a quick fix for the EU. Unfortunately, the last year has been marked by a combination of breathtaking ineptitude and hypocrisy by both the European Commission and European governments.

Northern European governments, particularly the likes of Germany, the Netherlands and France, are guilty of appalling dishonesty. They have peddled the false myth of themselves as virtuous nations paying for Greek profligacy, ignoring the fact that their own banks have quite happily bought up billions of euros of Greek debt despite knowing that Greece could not repay. The moral hazard of these actions has never been questioned. They are as responsible for the crisis as Greece is.

Similarly, by agreeing bail-outs but with crippling conditions, particularly in the cases of Greece and Ireland, the Commission and EU leaders have deepened the economic problems in those countries. The result of these bungled bail-outs is that we have a rising sense of economic nationalism – reform fatigue in the South, support fatigue in the North – at a time when most EU countries are at risk of being hurt by the same crisis.

Brave decisions need to be made in the next month to avoid meltdown in Greece and across the EU. The Greek government has shown enormous courage, now EU leaders must do the same.

There is no question that the eurozone needs to be reformed. Under the current conditions, there is no way that Greece and other deficit countries will ever be able to recover. We will soon find out whether Germany and France – the euro’s creators, are prepared to do what it takes to save the single currency.

Angela Merkel and Angela Merkel should be aware that the political and economic future of the euro can best be secured by assisting Greece.

7 Responses to “Is it really best if Greece goes bust?”