The strain of constantly U-turning was bound to tell. It was revealed this morning that cabinet ministers Pickles and Spelman are no longer on speaking terms. 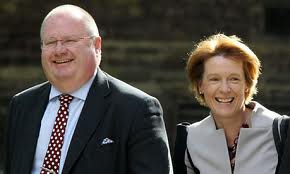 The strain, and motion sickness, of constantly U-turning was bound to tell on the government before long, and The Telegraph revealed this morning that after arguing over a policy reversal, cabinet ministers Eric Pickles and Caroline Spelman are no longer on speaking terms.

“…had a telephone argument shortly before the government announced an about-face on its plan to restore weekly bin collections.”

“Mr Pickles said to Mrs Spelman: “Why don’t you spend less time speaking to your officials and more time listening to the electorate?” Mrs Spelman then hung up on her colleague and the pair are thought not to have spoken since, according to their parliamentary colleagues…

“Mr Pickles and Mrs Spelman were said to have agreed previously to announce the reintroduction of weekly collections, supported by financial incentives for councils. However, the draft plan was ripped up days before it was announced…”

Pickles is said to be very passionate about the issue and has even:

“…quietly formed a unit within his department which is working on plans to resurrect the original proposal to return weekly collections.”

Left Foot Forward are not surprised by Pickles’s attachment to costly weekly bin collections, despite his huge cuts to local services that hit the poorest hardest. Earlier this year we reported on Mr Pickles’s victory in the first ever Talking Rubbish awards, with this quote:

“The iron fist of the municipal state has come down on people for the most minor of bin breaches.”

Spelman could only manage third place on that occasion and it is just possible, his passionate feelings notwithstanding, that Pickles is positioning himself to defend his title against possible challengers.

After all, Bob Neill, his own under-secretary for Communities and Local Government, came in second with the following:

“Fortnightly bin collections are a naked cut to frontline services and lead to problems with vermin, bin smells and fly-tipping.”

As Friends of the Earth pointed out:

“We’d actually free up money for better weekly food collections and recycling services if we got rid of expensive weekly collections of all our rubbish. So food waste would go just as quickly.”

For the sake of peaceful relations we advise all cabinet ministers, once again, don’t mention the U-turn.