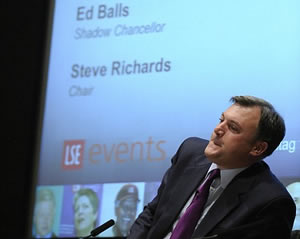 David Cameron was delighted when the formidable Ed Balls walked straight into his framing of the debate on the deficit at the LSE yesterday – and was promptly trapped. That framing goes as follows: we (the government) have spent beyond our means, and the way to pay for it is by cutting (public sector) jobs and raising taxation – like VAT.

Ed Balls’s speech concedes (as Labour has done since Alistair Darling’s time at the Treasury) the deficit reduction-emphasis agenda set by his opponents – and by so doing, implicitly concedes the need to cut public sector jobs.

But I am being unfair. Balls began his speech by mentioning Labour’s “emphasis on jobs and growth”, but the speech immediately morphed into Labour’s concession to the coalition, that what is needed is “a steady and balanced approach to halve the deficit in four years”. The implication being that cuts must be matched by ‘jobs and growth’.

But the highlight of the speech – the soundbite that his spin doctors no doubt intended the media to emphasise – is a call for a cut in VAT “to boost consumer confidence and jump-start the economy”; Cameron flashed back his retort: “slashing taxes”, he argued, would only make the UK’s fiscal deficit worse.

And so Balls is trapped: the debate now centres on whether the deficit can be financed by increasing or cutting taxes, in particular VAT. For most people, Cameron has the upper hand.

‘Of course the deficit can only be financed by increased taxes’ is the consensus. Because we have ‘spent beyond our means’, we have to raise taxes, like VAT. “Slashing” VAT – when it is higher VAT returns that are paying down the deficit – is unacceptable to the coalition, to the Treasury, to orthodox economists and to the bulk of the British public.

How? By the tax revenues that will pour into the Treasury’s coffers, either directly or indirectly – and by the savings that will be made on welfare benefits.

However, keep 2.43 million people unemployed, keep them feeling insecure, with their purses firmly shut, and you can guarantee an ever-rising government deficit (April’s deficit numbers were the highest on record for that month). And 2.43 million unemployed is sure to make British ‘confidence’ fall and the recession deepen.

And while it is encouraging that the private sector created 88,000 jobs between February and April, that still leaves 2.43 million people economically inactive, unemployed and lacking in confidence. Many millions more are worried about their job security and rising fuel and food prices.

So Ed Balls’ speech should have gone like this: jobs will cut the deficit; look after unemployment – and the budget will take care of itself; and if the private sector can only create 88,000 jobs in three months – while 2.43 million people remain economically inactive, depriving the Treasury of tax revenues, costing the Treasury dear in welfare benefits and causing the deficit to rise even higher – then government must step in and spend on public works, to create jobs.

Jobs will cut the deficit – and simultaneously create the ‘confidence’ the private sector needs to invest – to create more jobs. That framing would have put David Cameron on the defensive – would have pleased Labour’s base, and would have encouraged insecure voters. It would have put Ed Balls and Ed Miliband in a ‘winning state of mind’.

Instead we are back on sterile, old territory: the centrality of the deficit to all of political debate, and economic policy-making, and the eclipse of the subject of unemployment. Paying down the deficit as Labour’s leadership and its right-wing constantly concedes, is really important; for the coalition, it is is far more important than creating jobs, and getting 2.43 million people back into meaningful work.

So let’s go on emphasising the deficit, and ignoring the unemployed. But please, spare us the tears and anguish of politicians and economists when the deficit keeps rising.