Kevin Meagher looks at the history of Anglo-Irish relations and why this week's visit has been more about Britain coming to terms with it than Ireland. 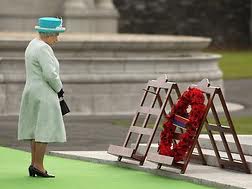 As the Queen’s state visit to Ireland winds up, the uninitiated in Anglo-Irish history may wonder, not unreasonably, what all the fuss was about.

After all, Ireland is our closest neighbour, a member state of the European Union, a major trading partner and a country with which Britain has a huge crossover in terms of population and culture. Why, then, all the palaver?

The Queen’s visit has been repeatedly described as “highly significant” – and it is – albeit for a specific reason. This trip has been a concerted diplomatic effort to find a moment of atonement for wrongs committed under British rule in Ireland before 1922 – an aspect of our history all but ignored in this country but imprinted on the DNA of all Irish people.

That is not to say Irish people have a hang-up with their British neighbours. Amid the pomp and ceremony of this week’s state visit, Irish and British people simply got on with living in peaceful and beneficial co-existence. President Mary McAleese has been a frequent visitor to Britain during her term as president. The entente from across the Irish Sea is decidedly cordiale.

But it is a complex history; as any between the former ruler and the forcibly ruled will be. Creditably, the Queen’s visit has boldly faced up to some of the more painful aspects.

Her gesture at Dublin’s Garden of Remembrance on Monday, laying a wreath and bowing in respect to those who fought – democratically and often literally – for Irish freedom, was telling.

When Ken Loach’s film The Wind that Shakes the Barley, which chronicles the Irish War of Independence (1918-1921) was released in 2007, it was shown on just 40 screens out of 3,500 across Britain – despite winning the Palme D’or at the Cannes Film Festival.

The suspicion and ignorance that surrounded the subject matter of how Ireland achieved freedom from Britain has been instantly neutralised through her action. It is an important story; one that deserves to be widely told, given that countless other countries under the British Crown emulated Ireland’s struggle for nationhood and liberty throughout the 20th century.

Similarly, the Queen’s visit to Ireland’s national stadium, Croke Park – scene of the infamous murder of 14 civilians in 1920’s “Bloody Sunday” (it is a mark of contemporary Irish history that there is more than one atrocity with the same name) by “British Forces” – evoked, very publicly, the frequently barbarous nature of British rule in Ireland.

“British Forces” is a euphemism broadcasters have used throughout the Queen’s visit. It is carefully chosen; referring to the infamous “Black and Tans” – the auxiliary paramilitary police force deployed across Ireland during the early 1920s. Hired mercenaries given guns and a loose mandate to rout Irish revolutionaries, but chiefly remembered for their litany of atrocities and war crimes against the civilian population.

Embracing the wrongs done to the Irish people is a painful but necessary step for Britain. The Queen led the way with her well-judged speech at the state dinner in Dublin Castle on Wednesday, saying:

“We can all see things which we would wish had been done differently, or not at all”.

The Queen’s visit has been an honest attempt to formally – and finally – put top-level diplomatic relations on an even keel. Neighbours and equal partners, at last. Of course there has been a pragmatic muddling through for ages. Indeed, the close co-operation during the Northern Ireland peace process helped in this regard.

That has meant there was no need for grand gestures or mea culpas from the British sovereign. To adequately do justice to 800 years of invasion, oppression, ethnic cleansing and chronic misrule would have taken much longer than the four days of this state visit. In that respect her trip reflects particular 20th century grievances – apt, nevertheless, given that the Queen was the British head of state for half of it.

There are plenty of them. In fact the visit is bookended by the anniversaries of the men executed for leading the 1916 Easter Rising and the majority of the ten men who died on Hunger Strike in 1981. Saturday sees the 30th anniversary of two of them.

Despite the BBC and Sky News vox-popping half of Dublin for their view, this visit is not primarily about Ireland, either old or new. It is about Britain embracing its own history – good and bad – and choosing to try and make amends where it needs to.

A week, perhaps, where the British state took another step in coming to terms with its diminished place in the world. And, finally, a very public display that whatever constitutional issues still lie before Britain and Ireland, there is – and always will be – more that unites the two neighbours than will ever divide them.