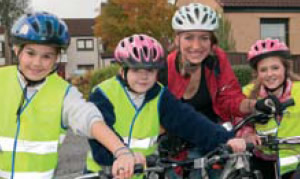 The first term of devolution delivered identical results to Scotland and Wales: Labour came top and formed coalitions with the Liberal Democrats. Since then, the nations have diverged, as yesterday’s elections underline, with Westminster politics playing a diminishing role in terms of influence on electoral campaigns.

Sustainable transport should not be subject to party politics, but it is inevitably the case that the agenda could thrive more easily under some parties than others with certain groups and personalities at better or worse dispositions regarding the role of active travel.

We’ve seen a broad but inconsistent take-up of our proposals for manifestos published in Scotland, Wales and Northern Ireland in the run-up to these elections.

Although local contexts are particularly important when considering political commitments, there are a number of issues which Sustrans is calling for in some format across the devolved nations:

• A commitment in statute to develop and maintain a network of paths for walking and cycling in the devolved nations;

• The creation of safer roads and streets for all users, especially the most vulnerable;

• Motivation and assistance to employers and employees helping them make more sustainable travel choices to, from and beyond the workplace;

• Giving every child the knowledge, skills and confidence to establish the habit of travel by foot and bike early in life.

In Wales we’ve seen a particularly positive picture with Welsh Labour and the Welsh Conservatives pledging to build on walking and cycling levels by encouraging a general movement away from cars, for recreation and health and well being through legislative duties.

Sustrans Scotland is calling for the new Scottish government in 2011 to regard Scotland as a typical northern European country in how it enhances the quality of life of all Scots and asking for statute and policy-led commitments to improve Scotland’s quality of life and shift away from focusing on road building by spending on value for money walking and cycling infrastructure that would have high cost-benefit ratios and help improve the quality of Scottish neighbourhoods.

A highlight from the mixed but promising manifestos was the commitment from the Greens to ensure that by the end of the next parliament active travel will receive at least 10 per cen of the transport budget and confirmation that walking and cycling must be a particular priority for school transport.

Devolved control of sustainable and particularly active travel offers a great deal in terms of opportunities for bespoke solutions to local issues. However we must keep our eye on the ball to ensure that all governments in Britain are equally accountable and willing/able to deliver evidence-based approaches.