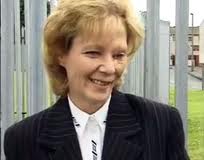 Following last week’s diplomatic whirl – and with the Queen’s coded mea culpa for Britain’s past deeds in Ireland still resonating – comes publication of the report into the murder of Rosemary Nelson, providing a glimpse as to why such signals of regret are sadly necessary.

Nelson was a 40 year-old human rights lawyer and mother of two killed by a car bomb in her own driveway in Lurgan in March 1999 by a loyalist offshoot group called the Red Hand Defenders.

She had been targeted because of her work defending Irish nationalists, including the residents of the Garvaghy Road in Portadown, who were engaged in a long-standing campaign against the Orange Order’s infamous Drumcree march through their community.

From the start, there were allegations of collusion, with elements of the British security forces suspected of involvement in her murder. Nelson had long complained about harassment from the former Royal Ulster Constabulary and the report finds that the RUC had a jaundiced view of Nelson who they erroneously claimed to be a “personality” in the Provisional IRA.

The publication of yesterday’s public inquiry report, from a three-man panel headed by retired judge Sir Michael Morland, concluded that there was no official involvement by the British security services in her murder, adding – with an enormous caveat:

“But we cannot exclude the possibility of a rogue member or members of the RUC or the army in some way assisting the murderers to target [her].”

The report is less equivocal when it comes to identifying the failures of the (now disbanded) RUC and the Northern Ireland Office (NIO), finding that “there were omissions by state agencies which rendered her more at risk and more vulnerable”.

In particular, the RUC was held to account for “a corporate failure” in not warning Nelson of her vulnerability and in not offering appropriate security advice following attacks on her legal practice. Meanwhile the NIO was accused of lethargy; dealing with reported threats to her life in “a mechanistic way” stemming, the report finds, from “a pervasive, passive hostility” towards her.

Rosemary Nelson’s murder was all the more searing given it did not occur at the height of “the dirty war” of the 1970s and 1980s; coming, instead, just a year after the signing of the Good Friday Agreement in 1998. It is a very modern crime, set not amid “the fog of war” but against the backdrop of what was supposed to be a new era of hope and progress.

This makes any possible link between state forces – whether rogue or not – and a loyalist death squad even more chilling.

In a week for expressions of regret for past wrongs, Northern Ireland secretary, Owen Paterson added another, telling the  House of Commons:

“I am profoundly sorry that omissions by the state rendered Rosemary Nelson more at risk and more vulnerable.”

However he added, “this panel finds no evidence of any act by the state which directly facilitated Rosemary Nelson’s murder”.

Shadow Northern Ireland secretary Shaun Woodward, on the other hand, warned his successor was “too hasty” in dismissing possible collusion. He added:

“This is uncomfortable reading for the RUC; this report disturbs me, why wasn’t Rosemary Nelson protected?

“She was an obvious trophy target, intelligence showed she was at significant risk.”

“Rosemary was a friend and a passionate campaigner for social justice. She did amazing work advising, supporting and campaigning on behalf of her community, spending a day a week, for example, providing free legal advice on traveller sites.”

“The state clearly failed to take proportionate steps to protect Rosemary. The list of RUC and NIO omissions makes for grave reading.

“Her death is a tragedy. One that is, despite this report, still shrouded in controversy.

“She was entitled to protection given the authorities knew she had become a hate figure for some loyalists, fuelled by the RUC’s disgraceful attitude towards her.