Captain Patrick Bury reports from Dublin on the security, symbolism and history of the Queen's first ever visit to the Republic of Ireland. 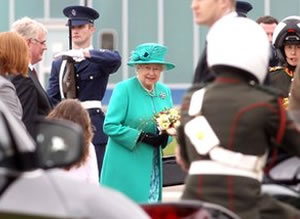 About 120 plain clothed and armed Met Police officers will be accompanying the Queen on her four-day state visit to Ireland. Most of these officers will be drawn from Special Operations 1 (SO1) who guard UK diplomatic VIPs abroad, and SO14, whose remit covers the Royals exclusively.

Aiding these will be Mi5 and Mi6, who will be paying particular attention to the dissident republican threat. In doing this they will be assisted by the Police Service of Northern Ireland (PSNI) over the border.

The Irish and British security services have a long history of co-operation in fighting the violence of the troubles and there has already further evidence of this surrounding this visit. The PSNI have sent two water cannon to the Irish police (the Gardai), should they need it.

There has been close surveillance of known dissidents, and some arrests both sides of the border. The Gardai have moved assets north, and close liaison between the intelligence services continues.

In Ireland itself the biggest security operation in the history of the state is now fully underway. Eight thousand uniformed Gardai, out of a force 14,000, are directly involved, supported by 2,000 members of the Irish Defence Forces on standby.

Other Irish units operating are the Special Detective Unit, the Emergency Response Unit (specialist armed police, like the Met’s SO19) and Irish special forces, known as the Army Ranger Wing.

These will fulfill a myriad of roles, including surveillance, close protection, air defense (a dissident plot to buy surface-to-air missile launchers was recently uncovered) and crowd control within Dublin itself. Although the threat from dissidents remains high, as seen by the viable and hoax IEDs reported this morning, the Guards are more concerned with the prospects of violent protest.

To this end, over 30 streets in Dublin have been closed and riot police travelling in fleets of buses will follow the Queen on her journey around the country.

The itinerary itself is bold and ambitious for the first visit by a British monarch in 100 years. Today, the Queen will visit the Garden of Remembrance in Dublin city centre, where she will lay a wreath and observe a minute’s silence at the foot of a memorial dedicated to those who “fought for Irish freedom”.

It will be a hugely symbolic and historic moment, hopefully not disrupted by the groups of dissenting nationalists who plan to broadcast anti-British rebel reels through speakers to disrupt the ceremony.

But neither will any of the public be able to catch a glimpse of the Queen. Security is so tight that no members of the public will be able to get anywhere near the Garden, according to reports.

Another of the 11 venues on the Queen’s agenda is Croke Park, the home of the Gaelic Athletic Association and the sight of the infamous British massacre of 1920. Hopefully that visit will go some way to healing old wounds.

Tomorrow will also see a visit to the War Memorial at Islandbridge, where the Queen will pay her respects to the more than 300,000 Irishmen who served and over 40,000 who died, many fighting for Britain, in the First and Second World Wars.

The Queen’s visit marks an interesting point in the continuing evolution of Anglo-Irish relations, perhaps finally and comprehensively showing both nations coming to terms with their often diverse, sometimes antagonistic, yet strangely common, collective pasts. This visit, I believe, highlights these.

For us Irish it shows that we are growing up; for the English that they are owning up.

Either way, for those responsible for the multi-faceted security operation, the next four days will be tense.