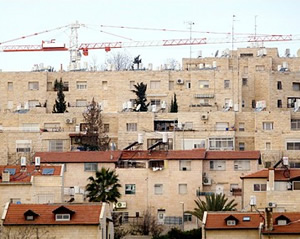 On Sunday, Israel announced the construction of 942 new settler homes in Palestinian East Jerusalem. The international response has been unambiguously damning.

UK foreign secretary William Hague could not have been clearer:

“This is not disputed territory. It is occupied Palestinian territory and on-going settlement expansion is illegal under international law, an obstacle to peace and a threat to a two state solution.”

While Baroness Ashton said on behalf of the European Union that the new settler homes:

“…run counter to achieving a peaceful solution that will preserve Israel’s security and realize the Palestinians’ right to statehood.”

And even the ever lacklustre US State Department commented:

Moreover, Israel’s Peace Now movement also released this short animated video explaining why, for the sake of Israel’s future, it is time to abandon the settlement project.

On Monday night Prosper Palestine outlined the peculiar situation the international community has found itself in, whereby we are united in our condemnation for the continuing illegal settlement of Palestinian land, but at the same time continue to sustain their very existence through widespread economic and financial ties to them.

The evidence we presented showed that if anything, the issue of settlement goods is not a distant economic issue for the political elite, but it is as close to our day to day lives as you can get. In your local Tesco.

These companies stock various settlement products from fruit and vegetables to carpets, pharmaceuticals, toys and wine.

Other speakers on the night were equally perplexed by our lack of action on the issue.

“There is a thin line between supporting Palestinians against occupation and helping them cope with its affects. Unfortunately kind words and statements made by the international community fall under the latter.

“There is no excuse to maintain economic ties with settlements. After revealing the type of economic relations between the UK and settlements, practical measures become possible and must be taken. It is time for action.”

It cannot make foreign policy sense to have the position of the government undermined by its economic inaction on the issue of settlement construction. Over the next few weeks and months, Prosper Palestine will be revealing similar links across the European Union.

By unravelling the settler economy from that of Israel itself, we hope to offer solutions to governments, local authorities and businesses who remain in this difficult bind.