Unemployment fell and employment rose in today’s labour market statistics, and most of the growth is accounted for by full-time employee jobs. But is it a blip? 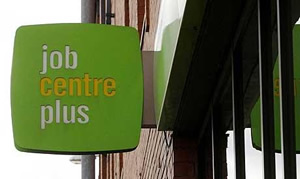 Unemployment fell and employment rose in today’s labour market statistics (pdf), and most of the growth is accounted for by full-time employee jobs. But is it a blip?

There were 29,233,000 people in employment during the three months from December to February, an employment rate of 70.7 per cent:

Employment is now at its highest level since January 2009; since the start of the recession, only two months have seen a higher month-on-month increase. 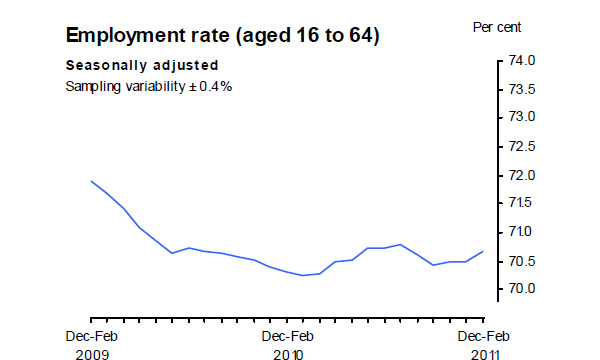 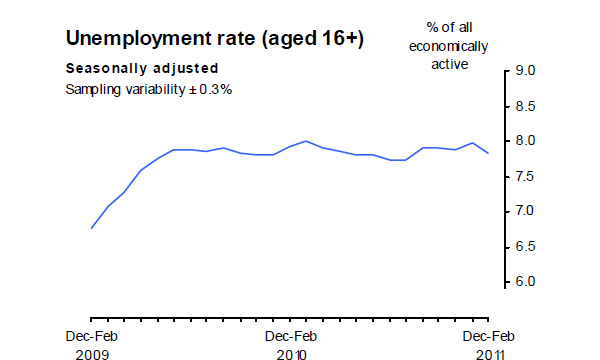 All too often in the recent past, there has been a worm at the heart of good employment results: increases have been in “atypical” work – self-employment, part-time and temporary jobs.

That has not been the case this month:

• Compared with the previous quarter, the number of employees is up 140,000 while the number self-employed is only up 12,000;

These are good results, but many reactions have been sour and negative.

The Guardian, Financial Times and Telegraph have all run round-ups of reactions from City economists and others and easily the most frequently used word is “however”. Even Chris Grayling, who doesn’t normally undersell the jobs results, went no further than to call them:

“…a small step in the right direction.”

And yet the indicators of employers’ recruitment intentions have been pointing in a positive direction. The Report on Jobs published by Markit and the Recruitment and Employment Confederation has been showing confident recruitment since the New Year.

Markit’s Purchasing Managers’ Indexes have been showing a similar picture (though possibly easing off in the latest editions.)

So why the long faces?

Of course, there’s plenty of reasons for believing that jobs growth in the private sector won’t fully compensate for public sector job losses. Inflation is running at more than twice the 2.0 per cent average growth rate for weekly earnings reported in today’s figures, making forecasts that UK household disposable income will fall by 2 per cent this year look entirely reasonable. And if domestic demand looks weak, our largest export markets – as Will Straw has reported – don’t look particularly strong.

But the official line has been that the only people who think these downside risks outweigh the upside are the usual suspects. And that’s the significance of today’s reactions. The fact remains that if the commentariat were more confident about the UK’s macro-economic prospects, they would have given today’s results a much more positive spin.

It’s a sign that, at least in the short term, no one is particularly confident about this country’s future.

3 Responses to “Good news on jobs, but too soon to start celebrating”