John Stewart of Airport Watch with the latest on the politics and issues surrounding aviation in the UK. 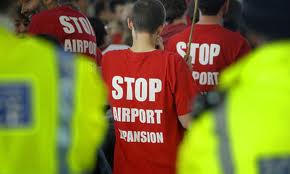 By John Stewart of AirportWatch

The government’s scoping document on aviation, published on Wednesday, presents some real challenges to Labour as it reviews its aviation policy over the summer. The scoping document, out for consultation until September and the first step in a two-year process to formulate an aviation policy, is very different in tone and content from what any government has previously produced.

“…in maintaining its support for new runways – particularly at Heathrow – in the face of the local environmental impacts and mounting evidence of aviation’s growing contribution towards climate change, the previous government got the balance wrong.”

It would be unwise to dismiss this as political posturing. The government is seeking to take aviation policy in a new direction. It reiterates its opposition to new runways at Heathrow, Stansted and Gatwick. It even says that, in the longer term, it expects:

“demand for domestic aviation and much of that for near-European short-haul aviation could be met by high-speed rail.”

Not unexpectedly, there is much talk about the importance of aviation’s role in providing connectivity for UK business, both internationally and regionally. There is support for “regional airports to flourish”. But what is new is the challenge to the aviation industry that it can only expand in any significant way if it gets its noise and emissions under control. Hammond writes:

“The current pace of technological change is not fast enough to reconcile growth on the scale of recent years with meeting our climate change targets or, in relation to some airports, our aspirations on local environmental impacts.”

The coalition’s final aviation policy may look different but, at this stage, its new thinking on aviation presents Labour with a challenge….and an opportunity. The challenge is to move away from its old policy which prioritised growth over both climate change and the very real noise concerns of local communities.

It was a policy which spawned a national opposition movement and at Heathrow a coalition drawn from:

“radical eco-warriors to middle-class mothers in west London, hedge fund managers in Richmond, to pensioners and parents in Brentford.”

The opportunity is to marry the new thinking emerging in the scoping document with equity concerns. That has to mean more than the chance for hard-working families to take cheap flights abroad. It has to include the rights of people under flight paths; the rights of the citizens of the global south not to suffer the climate consequences of the subsidised flying habits of the rich world.

And it has to challenge the intrinsic unfairness of a powerful industry getting generous tax-breaks – tax-free fuel; VAT-free products – when many pensioners are struggling to meet their fuel bills and unemployed people can’t afford the bus fare to get to work.

Labour needs a bold new aviation policy. Without it, the coalition will leave it standing on the runway looking very un-green.