Hugh O'Donnell, the Lib Dem MSP for the Central Scotland region has announced that he is to quit the party and contest the seat in May’s elections as an independent. 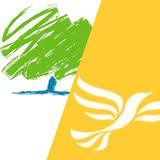 Hugh O’Donnell, the Lib Dem MSP for the Central Scotland region has announced that he is to quit the party and contest the seat in May’s elections as an independent. He did so with a swipe at his former party’s “betrayal” at entering a coalition with the Conservatives at Westminster.

Outlining his stinging criticism of Nick Clegg’s decisions to enter a coalition, O’Donnell concluded in the Mail on Sunday:

“Since that fateful day, I have watched helplessly from the sidelines as this Government at Westminster has attacked every vulnerable group in Scotland, from carers to disabled students to migrants, with some of the most draconian policies I have ever seen in the name of cuts.

“Not a word of criticism from the party leadership in Scotland has been uttered – even though the contempt shown for Scotland and, indeed, the federal structure of the party knows no bounds.”

He continued by describing what he has felt has become a reactionary and unprincipled party both north and south of the border, declaring:

“This is not the same party I joined, full of enthusiasm, all those years ago.

“I can no longer be party to the control freakery, the ‘image is everything’ attitude, and the dictatorial style of doing things.

“It is a party I no longer want to be part of and neither should other principled Liberals.”

The resignation will cause deep concern for the Lib Dems as they look set to fair badly in May’s elections to Holyrood, with the most recent ICM polling putting the party on just 10% in the constituency vote and 9% on the list vote. It has also previously been reported that the Scottish party has been looking for a ways of distancing itself from London.

Meanwhile, the Coalition has been accused of a lack of joined up thinking following the budget.

In his statement last week, Chancellor George Osborne hailed the launch of a consultation on merging national insurance and income tax as an “historic” opportunity to simplify the tax system. However, the decision could mean a fundamental revision and delay of the Scotland Bill providing for Holyrood to gain new  tax-varying powers, which had been based on the assumption that national insurance would remain administered by the UK Government.

Criticising the decision, John Aldridge, a former Finance Direct for the Scottish Executive, and a member of the Calman Commission  concluded:

“My main criticism is that the [UK] Government is not being joined up at all – in that you have a Chancellor who is coming up with the idea of merging income tax and national insurance at the same time as putting a bill through parliament in which national insurance is symbolic of the Union and income tax is less so.”