There was more evidence today of the impact of the coalition's cuts to education and the health service, with school building repais slashed and hospital bed numbers set to be culled by 20,000. 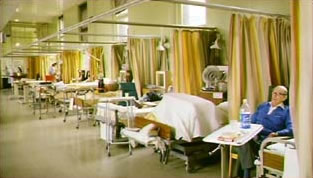 There was more evidence today of the impact of the coalition’s cuts to education and the health service, with school building repairs slashed and hospital bed numbers set to be culled by 20,000. On Wednesday, it was revealed that more than 50,000 NHS jobs faced the axe, while only yesterday a study warned of a rise in bed-blocking, with more beds being filled by elderly people well enough to be in residential care – a problem exacerbated by the fall in the number of beds.

On schools, new research by the House of Commons Library has revealed the average secondary school will see its budget for building work, repairs and computers slashed by £86,000 next year, with primary schools in England facing a cut of £26,000. At the time of the CSR, the chancellor insisted:

“We wanted to see if it was possible – even when spending was being cut – to find more resources for our schools and for the early years education of our children. I can tell the House that we have succeeded.”

Success? In addition to the headline figures, education faces a far greater cut in its capital spending settlement – 60 per cent – than the average across all departments of 28 per cent. Two weeks ago, education secretary Michael Gove was ordered to reconsider his decision to take an axe to the Building Schools for the Future programme, which a High Court Judge described as:

“…so unfair as to amount to an abuse of power.”

With the full impact of the decision to axe BSF now unravelling, and Labour describing it as “a return to the bad old days of the 1980s when children tried to learn in crumbling classrooms with equipment not up to the job”, Mr Gove may do well to heed Mr Justice Holman’s remarks.