Today’s UK trade figures highlight the scale of the task facing the government if it is to achieve its aim of rebalancing the economy, writes Tony Dolphin. 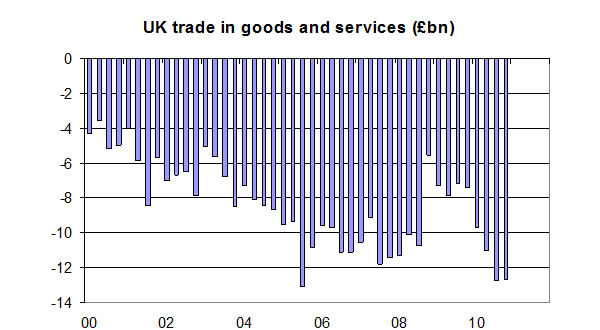 Today’s UK trade figures highlight the scale of the task facing the government if it is to achieve its aim of re-orienting growth in the economy away from debt-financed consumer and government spending and towards exports and business investment.

In the final quarter of 2010, the UK recorded its largest ever quarterly deficit in trade in goods (£26.2 billion) and its third largest ever quarterly deficit in total trade in goods and services (£12.7 billion). Only in the third quarter of 2010 (£12.8 billion) and in the third quarter of 2005, when the trade figures were heavily distorted by the effects of Hurricane Katrina, has the UK recorded a bigger total trade deficit.

Looking at the chart it is clear that the modest recovery in the UK economy seen so far has been accompanied by a return to trade deficits of a similar magnitude to those experienced in 2006 and 2007 – just ahead of the recession. It is hard to avoid the conclusion that, in respect of trade, there has been no rebalancing of the UK economy yet.

Exports are still increasing; the volume of exports (excluding oil and erratic items) was up 0.3 per cent in the fourth quarter (9.4 per cent on a year earlier). But imports are increasing faster and they rose by 2.5 per cent (9.6 per cent over the year). Import growth was rapid almost across the board, but particularly for capital goods, cars and basic materials. Exports of cars and basic materials were also strong.

These figures suggest that net trade (exports less imports) made a significant negative contribution to output in the final quarter of 2010 and make it less likely that the fall in GDP growth – provisionally put at 0.5 per cent – will be revised lower when a revised estimate is published on 25th February.

They also mean that the government’s new measures to encourage small and medium-sized businesses to export more, which are to be contained in a Trade and Investment White Paper due to be published later today, are all the more important if the economy is to be rebalanced.

2 Responses to “Rebalancing the economy: there is still a lot of work to be done”