George Osborne has shown a great deal of determination in his efforts to tackle the fiscal deficit; it is now time for him to show the same determination in promoting output and employment growth. 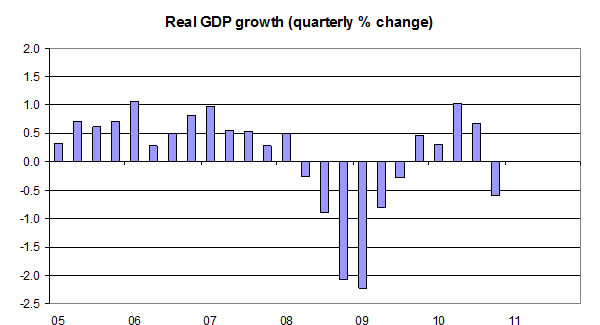 Figures released by the Office for National Statistics (ONS) today confirmed that the UK economy contracted in the fourth quarter of 2010. Real GDP shrank by 0.6 per cent – a little more than the 0.5 per cent decline that was originally reported. Economic activity in the UK appears to have been badly affected by December’s atrocious weather (more so than in the US and Germany, for example, where the weather was also terrible, but GDP increased by 0.8 per cent and 0.4 per cent respectively).

The ONS’s statisticians believe that around 0.5 percentage points was knocked off UK growth by the weather in the fourth quarter. Even so, there would still have been a slight fall if there had been no disruption. The underlying trend is, therefore, worrying; growth was 1.0 per cent in the second quarter of 2010 and 0.7 per cent in the third.

The details released for the first time today show exports of goods and services remain the bright spot in the economy. They increased by 2.3 per cent in the fourth quarter and were 6.4 per cent higher than a year earlier. But imports are also increasing strongly – by 3.0 per cent in the quarter and 9.0 per cent over the last year. Net trade was, therefore, negative for growth.

Despite the boost to competitiveness from sterling’s decline in 2007 and 2008, the UK remains some way from the hoped-for trade-led recovery. Domestic private spending was very weak; consumers cut their spending by 0.1 per cent and investment dropped 2.4 per cent. Overall growth would have been even worse if government spending had not increased by 0.7 per cent (adding 0.2 percentage points to growth).

Given the contribution from government spending is about to turn negative, it is important to understand what caused the slowdown in private demand in the second half of 2010.

Higher oil and food prices probably played a part. These are squeezing households’ spending power. More money is being spent in supermarkets and petrol stations and on fuel bills, leaving less for other goods and services. But real earnings (excluding bonuses) peaked in early 2009 and have been declining for almost two years; they cannot be the whole story.

What did change dramatically in the second half of 2010 was fiscal policy. Plans to increase VAT to 20 per cent from January 2011 and a four-year programme of substantial cuts in public spending were announced.

Most of these cuts only take effect from 2011 onwards, but it is likely that they began to affect confidence towards the end of last year. Businesses have become less confident about increasing their capital spending or taking on more employees; consumers are less confident about borrowing and more inclined to make precautionary savings.

To turn around confidence now is going to prove extremely difficult, particularly given the effect of turmoil in North Africa on the oil prices and the very real prospect of the Monetary Policy Committee increasing interest rates later in the year. What is needed in the Budget on March 23rd is a ‘Plan B’ – a strategy that promotes investment, innovation, job creation and regional development. Deregulation, cuts in corporation tax rates and the hope of a trade-led recovery are not enough, on their own.

George Osborne has shown a great deal of determination in his efforts to tackle the fiscal deficit; it is now time for him to show the same determination in promoting output and employment growth.