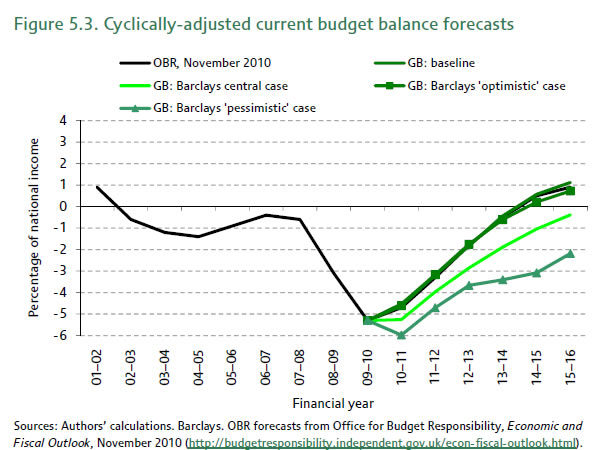 The respected Institute for Fiscal Studies think tank today urged George Osborne to prepare a ‘Plan B’ for fiscal consolidation in case growth prospects deteriorate. The Chancellor told the BBC Politics Show on Sunday that there was no alternative to his planned cuts.

Early headlines from the Telegraph, Standard, and Guardian have reproduced the IFS’ press release which outlined that there was “little room for Budget easing”. But as reported on Sky, the small print of the document and discussion at the event clearly called for the development of a Plan B in the medium term.

The Summary of the Green Budget document says:

“It may therefore make sense for the government to consider ways of reducing the pace of fiscal consolidation should demand conditions deteriorate significantly – enabling it to ‘trim the sails’ again in the same manner that it did so last November.”

Chapter 5 of the Green Budget includes a graph (reproduced below) showing how different growth scenarios would impact the budget balance forecasts. On both the central and pessimistic case developed by Barclays for the IFS, growth would come in lower than anticipated by the OBR with a knock on effect on the deficit.

“Although there may be no need to implement an alternative short- or medium-term plan at this stage, the Chancellor would be best advised to consider how he would respond to a changing – and, in particular, a worsening – outlook for the economy, the public finances or the quality and quantity of public services being enjoyed. Having such alternative plans to hand could prove useful.”

Responding to a question from the Financial Times’ Chris Giles, Michael Dicks of Barclays Wealth said:

“[The Chancellor] shouldn’t commit to cuts in stone. If growth was weaker than expected [the Government should] cut more slowly.”

While Carl Emmerson of the IFS added:

“It would be unlikely that the optimal spending decision in October 2010 would be optimal in 2012.”

18 Responses to “IFS urges Osborne to develop a Plan B”