On bankers’ bonuses alone, George Osborne’s constant changes of direction since becoming shadow chancellor in 2005 would be enough to make anyone’s head spin. 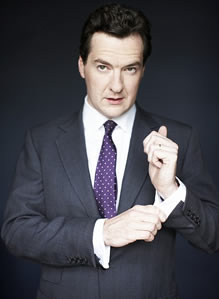 One could be forgiven for losing track of the number of u-turns the Tories and, especially, the Lib Dems have performed since taking office. On bankers’ bonuses alone, George Osborne’s constant changes of direction since becoming shadow chancellor in 2005 would be enough to make anyone’s head spin.

Depending on being in opposition or in government, his various arguments ranged from setting an unrealistic cap on bonuses to supporting an irresponsible big-bonus city culture.

In 2006, prior to the global financial crisis, his “criticism of [Gordon Brown]” was that:

Three years later, however, the advocacy of a light-touch approach was replaced by a heavy-handed rhetoric once public disgust at bankers’ bonuses was becoming more tangible in Westminster.

Hence, catching the whiff of an opportunity, he performed the first u-turn by suggesting in an interview with The Guardian that his party would use a heavy-handed approach in tackling the bonus epidemic prevalent in the banking sector. Attacking the “old-style City”, he emphasised how unacceptable it is for bank bonuses to be “paid on the back of taxpayer guarantees” and called for a limit of £2,000.

Last month, Osborne subsequently backtracked on cracking down on unacceptable bankers’ bonuses – the first item on the coalition’s agenda for government.

Ultimately, he once again performed a 180 degree turn by completely wiping the option of regulating bank bonuses off the table by stating how he is now “trying” instead to “persuade banks to make a greater contribution to communities, business and the regional economy”.

Faaaantastic! We are now trying to persuade the banks to do what they were set up to do – lending – instead of cracking down on their “we’re not all in this together” bonus spree.

Being the youngest Chancellor of the Exchequer for 125 years at the current tender age of 39, his lack of memory of his tough approach towards banks during the end of his opposition years cannot be blamed on senility; instead, what his lack of enthusiasm in limiting the City’s practices tells us is that he refuses to stick to his pledges and would rather endure the public’s fury than actually curb his banking chums’ pay.

If you hope for yet another Osborne u-turn on bank bonuses, you should prepare yourself for a long period of being disappointment.

Turning to 2009, Osborne argued in a debate in Parliament that:

“…when it comes to the Government and the banks, surely the public are entitled to ask why the Government talk tough and make promises, but then fail to deliver.”

In opposition it was easy for him to say he would outlaw the large bonuses his friends in the City were receiving; in government, we can see once again that his actions do not match his words – instead, they befit that of yet another ideologue Tory hypocrite incapable of understanding the conception of fairness for the man (and woman) in the street.