Following Ed Balls' appointment, the two coalition parties have been quick to point to Labour's regulatory failures. But the consensus on light touch regulation came from all three parties. 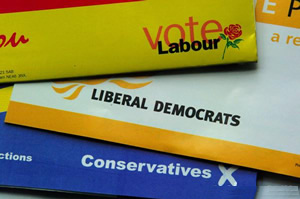 Following Ed Balls’ appointment as shadow chancellor, the two coalition parties have been quick to point to regulatory failures made by the Labour government in office. But the consensus on light touch regulation came from all three parties.

“Ed Miliband and Douglas Alexander can complain all they like about Labour’s terrible record on banks, but Ed Balls, the man responsible for 13 years of regulatory failure, is now back in charge of their economic policy.”

Yet in June 2006, George Osborne wrote in the Telegraph:

“Many of the regulations that affect the City, such as the Markets in Financial Instruments Directive, originate with the European Commission.

“I fear that much of this regulation has been burdensome, complex and makes cross-border market penetration more difficult. This is exactly the wrong direction in which Europe should be heading and it threatens the global competitiveness of the City of London.”

Indeed, as late as August 2007 – when credit market were starting to freeze – the Sunday Telegraph revealed that the Tories had “a radical programme of cuts in red tape and regulation aimed at saving British businesses £14 billion a year”.

The Lib Dems like to claim that Vince Cable saw the crash coming giving Nick Clegg more license to make claims such as:

“If you ask yourself who was in charge of the City when they were gorging themselves on bonuses and lending irresponsibly … who was whispering into Gordon Brown’s ear budget after budget, creating this huge fiscal deficit – the answer to all of those questions is Ed Balls.”

But as Channel 4 Fact Check has documented, Vince Cable had been a supporter of Gordon Brown’s light touch economic policy. Speaking in the House of Commons in support of the Labour government’s Financial Services and Markets Bill which established the Financial Services Authority:

“I want to express broad support for the bill, whose philosophy and whose architecture of financial regulation reflect a broad consensus.”

According to the New Statesman, Cable said “No one is arguing for an increasingly severe, more onerous and dirigiste system of regulation.” Any regulation, he said, should be “done on a light-touch basis”.

On the regulation of the City before the financial crash, politicians of all parties certainly were all in this together.

45 Responses to “Lib Dem, Tory and Labour all in this together on financial regulation”