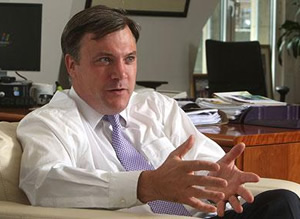 New Shadow Chancellor Ed Balls tonight pledged to put employment and growth at the heart of Labour’s alternative plan for the economy. Writing on his blog, Balls says the coalition have taken a “reckless gamble” and made a “historic mistake”. He says the government have “staked the whole future of the economy on one card – the fastest, deepest deficit reduction plan in Britain’s peacetime history”, resulting in “unemployment now rising, economic growth forecast to slow, mortgage lending at a 20-year low and tax revenues falling”.

“They inherited an economy which was beginning to recover strongly, with unemployment falling, interest rates at historic lows, and the public finances better than the Treasury’s forecasts.

“Britain had weathered the first economic storm and was on track for jobs, growth and – with tough choices on spending, tax and supporting growth – we were on a credible and sustainable path to deficit reduction.

“The Tory-led government has deliberately and needlessly taken Britain down a different path with cuts that go too far and too fast, and tax rises which directly hit family budgets. They have cut jobs programmes, withdrawn government investment from the economy, raised VAT, and cut government support to millions of families.”

Balls warns that, “as the impact of the VAT rise, deep spending cuts and rising inflation starts to hit home”, if the government’s “gamble” fails to work and growth is slow in 2011, it will be the “millions of ordinary workers, families and homeowners who will pay the price”.

He also says Labour will “apply the bank bonus tax again”, which brought in £3.5 billion in 2010 and “could be used this year to help create the jobs and growth we need”, adding:

“The lesson of history is that good economics is good politics. But when Chancellors put political ideology or expediency before economic logic, the country pays a heavy price.

“This Tory Chancellor and this Tory-led government are repeating the mistakes of the 1930s and 1980s, but they just keep ploughing on. They had a choice about which path to go down, and it is already becoming clear they have made the wrong choice.”

Yesterday on Left Foot Forward, Tony Dolphin wrote that the economic recovery “looks to have lost some momentum in the last few months”, while Howard Reed pointed out that, as well as the government’s cuts failing to maintain the pace of recovery, “those must vulnerable are being hit hardest”, explaining how:

“… across a whole range of measures, the coalition’s spending cuts fail the fairness test and give the lie to Cameron and Osborne’s claim that ‘those with the broadest shoulders are bearing the heaviest burden’.”

And on Wednesday, Nicola Smith analysed the latest labour market statistics, which said were “simply bad news”, the deterioration in the labour market becoming “a cause for real concern”:

“The monthly unemployment data are slightly more promising (a small fall of 4,000 – although this is within the statistical margin of error) but monthly employment levels fell by 36,000 (meaning that over the last two months levels have fallen by 100,000 in total) and inactivity rose by 83,000.

28 Responses to “Balls vows to put “jobs and growth first””