There is good news today for the 'Yes to AV' campaign. The Independent on Sunday shows "almost two-thirds of people amenable to ditching first past the post". 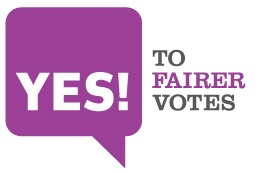 There is good news today for the ‘Yes to Fairer Votes‘ campaign to reform the electoral system. The Independent on Sunday carries an exclusive poll showing “almost two-thirds of people amenable to ditching first past the post”.

“An exclusive poll for The Independent on Sunday says a third (34 per cent) have already decided to back the alternative vote in the referendum planned for 5 May, a vote which Labour peers are seeking to delay.

“But the ComRes survey reveals 61 per cent could be persuaded to support changing the voting system when they have heard more of the arguments for and against. Surprisingly, 54 per cent of Conservative voters are open to persuasion.

The ‘Labour Yes‘ campaign also received a boost yesterday when Ed Miliband told delegates at the Fabian Society conference that:

“We will take every opportunity to reform the way our political system works.  That is the reason I will be campaigning in favour of the Alternative Vote in the referendum. I will keep my promise.”

A debate at the conference on ‘The Democracy Challenge‘ indicated almost universal support for the Alternative Vote among delegates.

Meanwhile, the Yes campaign has “thrown down the gauntlet” to Margaret Beckett – president of the No to AV campaign – calling for a debate on the issue “any time, any place, anywhere”. Jonathan Bartley, spokesman for Yes to Fairer Votes, writes in an open letter:

“Ahead of May’s referendum it is only right that both those of us who want change, and those of you seeking to preserve the status quo get the chance to debate our issues fully so that people can make an informed choice.

“So far our spokespeople have met on just a handful of occasions on both broadcast and in print, indeed you and I spoke together on Newsnight before Christmas.

“Those occasions leave me with this question – what exactly is your argument to keep First Past the Post?

“I have listened to recordings of our sides respective appearances on television and radio many, many times. I have read and re-read the newspaper articles and yet I still cannot make out what you are saying.”

The public can add their support for a debate by signing up here.