The Woolas case raise an interesting question for the Labour party: if the electorate become hostile to civil liberties, should we? Michael Harris examines the issue. 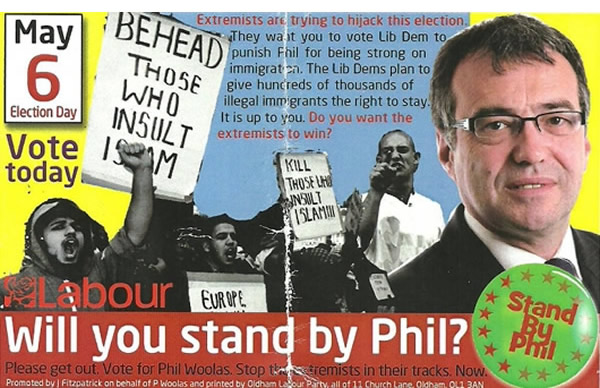 “We need … to explain to the white community how the Asians will take him [Woolas] out … If we don’t get the white vote angry he’s gone.” – An email sent by Phil Woolas’s election agent Joseph Fitzpatrick to his campagin adviser Steven Green; the result can be seen below:

The rise of the Tea Party is the triumph of anger over reason. The politics of the demotic crowd are rarely harnessed for progressive causes: they play to the belly, the visceral reaction, the fear of the unknown other. Sarah Palin’s famous quote, “How’s that hopey, changey thing working out for ya?” is instructive. Tea Partiers are in the classic mould of Edmund Burke, cynical and un-enamoured by the optimism that reason will triumph.

The Woolas case raises an interesting question for the Labour party: if the electorate become hostile to civil liberties, should we?

“It is no part of Labour’s politics to try to win elections by telling lies. We believe in good community relations – in fact that is central to our politics – and Phil Woolas has been suspended from the Labour Party.”

But this isn’t the end of the debate. Ed Miliband signalled a strong intention to move away from the wolf whistle politics of the past on civil liberties and immigration, but the temptation in the event of another terrorist attack will be there.

As the Economist’s Bagehot column points out today:

“On terror and crime, most voters are in tune with the Tory right: and that is before the dreaded prospect of another terrorist attack in Britain. The Labour opposition… could wound the government by portraying it as ideologically hostile to the state in all its functions, whether in protecting people’s livelihoods or indeed their very lives.”

Phil Woolas exemplifies a strain of thought (and action) in the Labour party that plays to base instincts for electoral gain.

It’s the ugly face of Labour, the patronising posturing on immigration and ‘Muslim fanatics’ that goes against what the voters know: that it was Labour that oversaw an increased level of immigration and incorporated the European Convention on Human Rights into British jurisprudence (a leap forward for human rights here).

It’s worth being clear that Labour was not wrong in thinking long and hard about both immigration and the risk of a 9/11 style terrorist attack; the Simon Jenkins school of thought that “terrorism poses no threat to Britain’s national security” is detached hokum.

Jenkins is happy to see the state as an irrational actor, scaling up resources to prevent what he sees as the unlikely possibility of a terrorist attack – but he does not see al-Qaeda as irrational, even though the organisation, if it could obtain one, would use a nuclear weapon in a Western city.

However, there’s a world of difference between the attempts by the intellectual left to reconcile globalisation, anti-totalitarianism and terrorism of, say, Alan Johnson’s journal Democratiya, and the knuckle-headed and sinister politics of Phil Woolas’s attack leaflets.

Let’s be frank, it was Woolas politics that helped lose Labour 5 million voters between 1997 and 2010 as voters turned away from our lowest common denominator politics: 90 days’ detention, locking up asylum seekers – including children – and restricting the right to protest in Parliament Square.

Triangulation failed, simultaneously sending scores of small ‘l’ liberals to the Liberal Democrats, whilst those we were attempting to court abandoned us (especially C2/DE voters) knowing that our leaflets about ‘getting tough with immigration’ were nothing more than meaningless rhetoric. In short – we weren’t being straight.

The decision of Mr Justice Nigel Teare and Mr Justice Griffith Williams to find Woolas guilty of illegal practices under election law sends a clear message about probity in elections: that the truth matters.

“Mr Woolas, believing that he was going to lose the election, resorted to terrifying white voters into believing that there was an extremist militant Muslim element in Oldham, who were in cahoots with Mr Watkins. He wished to convey the message that a vote for Mr Watkins was a vote for extremists.”

Some have argued that this is a free speech issue – it isn’t. The right to free speech is always universal – but qualified. You cannot shout ‘fire’ in a crowded theatre. You cannot maliciously defame someone (and even after Libel Reform you won’t). Free speech is not the right to influence an election through spreading mistruths about your opponent.

Where it becomes a free speech issue is the barring of Woolas from the Commons for three years. Even if Woolas has made false statements about an opponent, surely it is the right of the electorate to make a decision on his probity for elected office – not judges. In recent years there has been a deeply undemocratic tendency to allow the unelected to bar the elected from public office. It ought to be for political parties to decide whether individuals who have broken the law should be their candidates.

The actual subsection of the Representation of the People Act 1983 reads:

(i) being registered as an elector or voting at any parliamentary election in the United Kingdom or at any local government election in Great Britain,

(ii) being elected to the House of Commons, or

(iii) holding any elective office; and

(b)if already elected to a seat in the House of Commons, or holding any such office, shall vacate the seat or office as from the date of the report.”

The relevant period in Woolas’s case is three years. So for three years Phil Woolas cannot stand for election or even vote. I hope I’m not alone in thinking this is draconian. This is where the law needs to change. The whim of the electorate must remain supreme – the public should get what the public wants.

Long after the Woolas affair dies down, the temptation will be there for Labour to score easy wins against the coalition on civil liberties. In the dreadful event of another 7/7 this impulse may become difficult to resist.

To detoxify Labour, Ed Miliband must stand firm on civil liberties, even if it costs us popularity in the short-term. In 1997, the Tories were the nasty party; in 2010, after looking through the Woolas leaflet can we hold our heads high and say Labour is still the nice party?

38 Responses to “Woolas represents toxic Labour: but he shouldn’t be barred from standing again”