Chris Grayling is at it again. DWP has been telling porkies on the number of households affected by the new benefits cap. The true figure is 25,000 rather than 100,000. 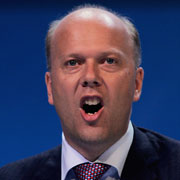 Iain Duncan Smith and Chris Grayling’s Department for Work and Pensions are at it again. Fresh from their erroneous private briefings on worklessness and a spate of “dubious or selective use of statistics concerning welfare and benefits“, the department has been telling porkies on the number of households affected by the new benefits cap.

Although overshadowed at the time by the means-testing of child benefits, George Osborne announced at Tory party conference:

“These days we’ve really got to focus the resources where they are most needed. We’ve got to be tough but fair…

“So, for the first time a cap on benefits. No family on out of work benefits will get more than the average family gets by going out to work.”

The softening up had taken place over the summer with one story in the Daily Mail on August 7th particularly striking:

“Officials at the Department for Work and Pensions highlighted the figures after the coalition pledged an overhaul of the welfare system to make work pay.”

Employment Minister, Chris Grayling, no stranger to misuing statistics, told the paper, “When thousands of people are earning more on benefits than hard working families struggling to get by there must be something wrong and I’m shocked that this was allowed to happen.” The Express and Telegraph dutifully ran the story but no press release carrying the figures or quote appeared on DWP’s website.

“£26,000 a year is equivalent to £500 a week. Latest estimates show that in 2010-11 there are fewer than 25,000 working age households in receipt of more than £500 a week in all benefits and tax credits, excluding disability living allowance and child benefit.”

Pressure has been mounting on DWP’s press office to improve the transparency of their briefings. This latest development will only turn up the heat.