The Shadow Chancellor Alan Johnson today attacked the Coalition Government’s plan, arguing that it risked jobs and growth, and set out Labour's alternative. 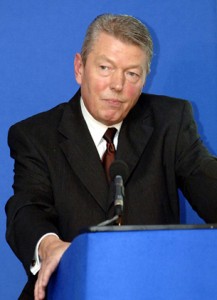 The shadow chancellor Alan Johnson today attacked the coalition government’s deficit reduction plan, arguing that it risked jobs and growth, and set out the Labour party’s approach to halving the deficit in four years as well as raising new taxes on bankers.

Mr Johnson said that the coalition government’s plan to eliminate the deficit in five years was being driven by dogma and that it was “relishing the opportunity” to make cuts to public services. The shadow chancellor outlined Labour’s plan to raise more through taxation – particular via the banks, who Mr Johnson said should be forced to contribute more than the existing £2.4bn banking levy.

Speaking before an audience in the City of London, he suggested that a tax on bonuses, through which Alistair Darling recouped £3.5bn last year, should be maintained alongside increases to the banking levy. Additionally, he said that Labour would support the rise in capital gains tax.

“Taking a slower, less damaging route as we propose provides a credible plan, securing growth and protecting public services. Requiring a greater contribution from the banks. And tough choices on spending and welfare. So there is another way. The Government must think again.”

Mr Johnson accused the coalition government of resurrecting “Tina” from the Thatcher era, by wrongly arguing that “There Is No Alternative”. Instead, the shadow chancellor outlined that many public sector jobs would be saved by Labour’s alternative plan. New taxation and a slower timetable would mean Labour’s deficit reduction plan would leave £27bn more for public services, which represents eight per cent cuts at departmental level (as opposed to the 14 per cent being proposed by the Coalition).

In addition, Mr Johnson announced that capital spending cuts would be “almost half” the 33 per cent proposed by the coalition – a u-turn on a policy announced by Gordon Brown. He said Labour’s approach of halving the deficit by 2014 could save vital infrastructure projects and the Future Jobs Fund.

He told the audience:

“An approach that is fair. That recognises that growth and jobs are central to our economic strategy – not a side issue. An approach that values our public services, rather than relishing the opportunity to curtail them. That treats the public as intelligent enough to understand that bringing the world economy back from the brink of catastrophe is not the same as paying off a credit card bill.”