Ruwan Subasinghe, a lawyer at the International Transport Workers’ Federation, on the background to the nation’s trade union laws. 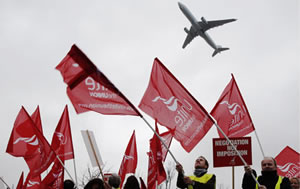 At a time when broadsheet and red-top newspaper commentators are warning us of the ‘nightmare of union power’, the last thing you would expect to find in the papers is an item on John McDonnell MP’s Private Members’ Bill, which if passed will prevent employers from using minor technicalities to overrule democratic industrial action ballots.

That said, I would not be surprised to see the following headline make the cover of the Daily Express:

The Lawful Industrial Action (Minor Errors) Bill is but one of the measures being taken by trade unions and their supporters to highlight the ever increasing attacks on industrial democracy. The RMT has lodged papers with the European Court of Human Rights arguing that its ability to organise industrial action is being restricted by UK law in violation of Article 11 of the Convention. Unite and the NUJ have announced that they will be following suit.

As the law stands, unions have to provide employers with notice of ballots and industrial action to a sometimes impossible level of accuracy. They have to (among other things) provide exact numbers, workplaces, job titles and categories of those members to be balloted.

While these obligations might not sound too onerous at first, it should not be forgotten that contracting out and outsourcing of work has made it very difficult for unions to maintain updated membership books. There are also various other duties placed on unions after a ballot has been conducted.

While the law permits unions to make small ‘accidental’ mistakes that don’t affect the result of the ballot, employers only have to show there is a ‘serious issue to be tried’ when seeking an injunction against industrial action. 2010 has seen some farcical injunction applications by employers and some very creative judgments.

There have been no fewer than seven high profile injunction cases with six of them unsurprisingly in the transport sector. The most absurd judgment came in the now infamous case of BA v Unite where an injunction was granted because the union failed to tell members that there were 11 spoilt ballot papers out of a total of 11,600. The decision was overturned on appeal.

So how did we end up with such a complex and unnecessarily onerous balloting system you might ask? The answer to this question lies in the Conservative Party’s love for all things Friedrich Hayek.

You may recall Margaret Thatcher showing her undying love for the man’s work when she famously brought a copy of his ‘Constitution of Liberty’ to the despatch box. Let’s not forget that this was a man who called for a “libertarian anti-labour union movement of workers to combat the trade union monopolists”. This is what the Conservatives based their industrial relations revolution on.

Under the guise of wanting to protect trade union members’ democratic rights, the Tories sought to limit autonomy in the way unions conducted strike ballots. What they did not take into account was the unique nature of industrial democracy and the collectivist ideals that underpinned the entire movement. They certainly did not consider unions as multifaceted organisations with a variety of representative structures.

For example, large unions used to gauge membership opinion using different methods depending on whether the dispute was local, regional or national. It can be argued that the lack of autonomy to estimate membership support for strike action in urgent situations can actually prolong disputes. Compulsory postal balloting also took away the collective social process that is endemic to the workplace ballot. Basically, it was a ridiculous idea to impose libertarian ideals on trade unions.

Unions are now left facing a situation where employers are blocking industrial action using legislation intended to protect union members. Mr McDonnell’s Bill and the European Court of Human Rights cases will hopefully bring this issue to the fore at this crucial time for the labour movement. Maybe the trade union ‘dinosaurs’ got it right this time around. Mr Miliband (whichever one wins), please take note.