Today it was announced that Boris Johnson is to stand as the Conservative candidate in the 2012 election to be mayor of London, hoping for a second term in office... 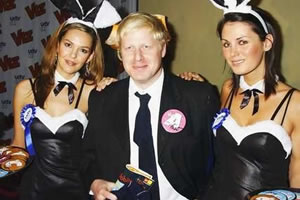 Today it was announced that Boris Johnson is to stand as the Conservative candidate in the 2012 election to be mayor of London, hoping for a second term in office…

Boris was a favourite when he occasionally appeared on Have I Got News For You?, but in City Hall, he’s not so funny. An increase of 20 per cent added to the cost of bus travel, cuts in the number of police on the beat, scrapping Ken Livingstone’s house building target are a few examples of his unsavory behaviour whilst in office.

In recent weeks, Boris has appeared to be increasingly against the path that his party is taking – hitting out against the cuts to the Crossrail project and seemingly agreeing with Ed Balls’ rhetoric on the economy:

“Whatever you say about Spheroids, he not only has balls. He has ideas. He has conviction. He has a grasp of economic history, and as he showed in his Bloomberg lecture last week, he knows how to mount a compelling argument.

“There was Martin Wolf in last week’s Financial Times, warning that ‘Ed Balls’s critique is right’; and blow me down, there was a leading article in the normally pur et dur Thatcherite pages of the Sunday Times. ‘An awful thought,’ ran the panicky headline, ‘but what if Ed Balls is right?’“

The Left Foot Forward team has compiled a collection of gaffe-prone Boris’s best, and worst, moments.

He has notably insulted people in the cities of Liverpool (commenting that the city was wallowing in “victim status”) and Portsmouth (accusing it of being rife with drugs and obesity), and the country Papua New Guinea, after the Spectator linked it to “cannibalism and chief-killing”.

His appearance on Room 101 with Paul Merton resulted in him wearing a fez, smoking jacket and enjoying a cigar: Popping into the fictional ‘Queen Vic’ for a pint and a cameo role in Eastenders. View the performance here (one minute in).

His foul rugby tackle in a charity football match against Germany and falling over in front of the media in Lewisham whilst cleaning a river.

His side-splitting speeches – including the “whiff-whaff” speech at the Beijing Olympics – and insane interviews, like the tête-à-tête with Jeremy Paxman at the Tory Party conference last year.

Oona King, who is campaigning to be Labour’s candidate for London Mayor, composed a blog on Boris standing for a second term, saying:

“But it’s neither funny nor entertaining that Londoners will be hammered by his Tory/Lib Government, hell-bent as they are on dismantling our public services, making people unemployed and hitting the poorest hardest.

“You get the impression Boris has no idea how he ended up as Mayor and now doesn’t know how to escape.

“My mission through our campaign over the next two years will be to demonstrate what a Labour mayor can and will do on entering city hall, being a real champion for this city and delivering real change and progress for Londoners”

“I welcome Boris Johnson’s confirmation that he will run again in 2012 because he now has a record that means he can be held to account.

“For those who want to express their opposition to the cuts and higher fares of Boris Johnson and David Cameron the first opportunity to send a signal that they want something better will be to remove Boris Johnson from office in 2012.

“While Boris defends the bankers and polluters, I will stand up for ordinary Londoners and fight tirelessly to protect the capital from Boris Johnson and David Cameron’s cuts.”

Ken has also had a boost in support today, with Members of Parliament Lyn Brown and Malcolm Wicks coming out in support for his campaign to be Labour’s mayoral candidate for the London mayoral elections in 2012.