George Osborne is the most popular Conservative Chancellor ever. But he has not reached the heights of either Labour's Denis Healey or Gordon Brown. 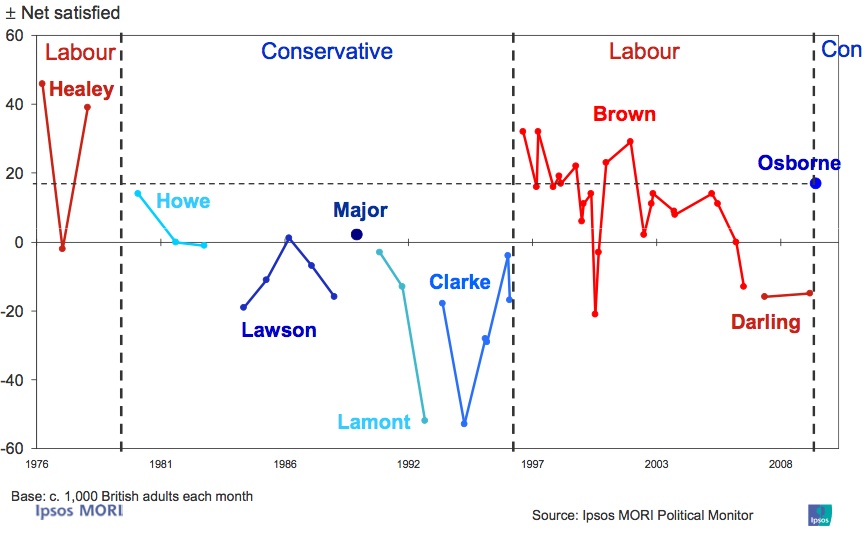 A couple of days ago, Guido Fawkes revealed the shock poll that George Osborne is the “most popular Tory Chancellor ever”. What he failed to tell his readers is that Osborne is some way behind the popularity reached by two of Labour’s three most recent Chancellors: Gordon Brown in Labour’s first and second terms or Denis Healey in the late-1970s.

Although carefully avoiding any mention of Labour’s Chancellors, the picture used by Guido liberally used photoshop to remove the Labour data points. Left Foot Forward has gone through Ipsos-MORI’s fascinating slide pack on the Coalition’s first 100 days to dig out the full chart.

Gordon Brown’s popularity dipped into unsatisfied territory on only two occasions – once around the time of the fuel protests in 2000 and again as prepared to become Prime Minister – but he never hit the depths reached by Norman Lamont or Ken Clarke. The surprise finding is that Denis Healey was so popular despite presiding over the Winter of Discontent.

Some will argue that Healey’s popularity bodes well for George Osborne since he also undertook a period of fiscal consolidation. The difference, of course, is that the cuts in the 1970s were demanded by the IMF shielding Healey from some of the blame. And while Healey reduced the level of public expenditure from 49.7 per cent of GDP to 45.1 per cent, George Osborne is attempting to go twice as far by reducing the public sector from 48.1 per cent of GDP to below 40 per cent.

The eyebrows and piano playing helped too.