Yesterday we reported on the leaked DfID documents outlining up to 100 projects that may be scrapped, as part of their crusade on 'output' based aid; now there is confusion over whether a key commitment on aid effectiveness has been scrapped or not. 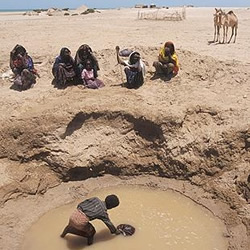 Yesterday Left Foot Forward reported on the leaked DfID documents outlining up to 100 projects that may be scrapped, as part of their crusade on ‘output’ based aid. We argued that this new focus was unnecessary when DfID was already regarded as a world leader in delivering aid effectively.

Now there is confusion over whether a key commitment on aid effectiveness has been scrapped or not. The implementation of the Paris Declaration on Aid Effectiveness was at the bottom of the list of 19 commitments that may be saved from the chop – but at odds with the Coalition’s focus on transparency DfID have refused to confirm if it has been saved.

The Paris Declaration is considered by the UK Aid Network – a policy and lobbying grouping of the UK’s leading NGOs – to be “the most comprehensive international attempt to date to define principles of effective aid.” They say:

“The Paris Declaration commits donors to put ownership at the centre, align their support to country strategies, harmonise their procedures to reduce bureaucracy, as well manage for development results and build mutual accountability.

“A consensus has emerged that reforms in these areas are critical to making aid more effective, in large part due to increasing awareness of the negative effect that these types of practices have on the impact of aid.”

In the OECD report which praised DfID’S effectiveness under Labour, the implementation of the Paris Declaration is a corporate priority (addressed explicitly in its corporate performance framework) and cited as one of the key indicators of the Department’s aid effectiveness.

DfID must not drop the commitment to implement this key agreement – if it does it will seriously handicap their ability to deliver aid effectively and deliver value for money.

12 Responses to “Uncertainty over DfID commitment on aid effectiveness”