Three-quarters of non-Muslims believe that Islam is bad for Britain, 63 per cent ‘did not disagree’ with the statement ‘Muslims are terrorists’ and 94 per cent said Islam oppresses women. These are the results of a poll reported by both the Guardian and Sky. 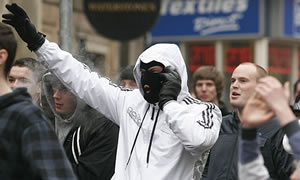 Three-quarters of non-Muslims believe that Islam is bad for Britain, 63 per cent ‘did not disagree’ with the statement ‘Muslims are terrorists’ and 94 per cent said Islam oppresses women. These are the results of a poll reported by both the Guardian and Sky.

Unfortunately, neither outlet looked into the people who commissioned the poll – the impressively named ‘Islamic Education and Research Academy’ (iEra) – and whether they might have their own agenda. Just a brief look at their website would have revealed that iEra are not exactly a moderate, impartial voice.

Neither Sky nor the Guardian noticed, for example, that the home secretary has banned two of the eight advisors listed on iEra’s website (Zakir Naik and Bilal Philips) from the UK; Naik has been quoted as calling Americans “pigs” and saying that “every Muslim should be a terrorist” whilst Philips has advocated stoning people to death and public lashings, but “only […] on Fridays”.

This is not to say we should be unconcerned by an increasingly anti-Muslim atmosphere in this country or that we should entirely dismiss the poll’s findings. Rising hostility to Muslims is a serious problem for all of us, Muslim and non-Muslim.

A British Social Attitudes survey published in January found that just one in four British people feels positively about Islam and that a majority would be concerned if a mosque was built in their area. Similarly, in June this year, a poll commissioned by the ‘Exploring Islam Foundation’ found that 58 per cent of British people said they associated Islam with terrorism and 69 per cent said they believed Islam oppresses women.

The emergence over the past year of the ‘English Defence League’, whose recent Dudley march ended in rioting and 20 arrests, is just one facet of this worrying trend. Their attempts to pass themselves off as being ‘anti-extremist’ rather than anti-Muslim are undermined by the chant ‘Allah! Allah! Who the f**k is Allah?’ which rang out during their recent march in Barking, East London.

Such anti-Muslim sentiment, fuelled by careless tabloid journalism which fails to distinguish between mainstream Muslims and extremists like iEra’s Bilal Philips, is on a worryingly incessant rise. Headlines like ‘Now Muslims Demand Full Sharia’, accompanied by journalists lazily reporting as fact fantastical claims that extremists would gather thousands of supporters, are understandably worrying for the majority of British citizens who are not familiar with this area.

This does not mean, however, that groups like iERA should not be examined – particularly if they seek to use the results of such polls for their own ends. Their senior researcher, Hamza Tzortzis, is quoted by the Guardian as saying:

“We wanted to do something positive with the survey results rather than just say ‘It’s so sad’. So, the organisation’s strategy is to give a new realm of possibility for people to comprehend Islam, have a proper respect for Islam and see the human relevance of the faith.”

In effect, iEra are openly using these results to argue that people, Muslim and non-Muslim, should listen to their interpretation of Islam. This is troubling given Tzortzis’s links with the radical group Hizb ut-Tahrir and because he is on record as saying:

“We as Muslims reject the idea of freedom of speech, and even of freedom.”

iEra’s tactic is therefore to raise the spectre of anti-Muslim bigotry to help spread their own ideology. This is the mirror image of the EDL who use the statements of extremists like iEra’s Tzortzis, Philips and Naik to justify their anti-Muslim ideology.

The result is a feedback loop, whereby extremists on both sides shout louder and louder that their existence is under threat from the ‘other’ as a way to justify their own tribalist mindset. This vicious cycle is difficult to break and its real victims are the moderate mainstream who – stuck in the middle – are deafened by both sides.

So, whilst we should all be troubled by the rise in anti-Muslim sentiment in this country, we should also beware of the extremists of all shades who hope to exploit this phenomenon as a way to spread their own ideology.