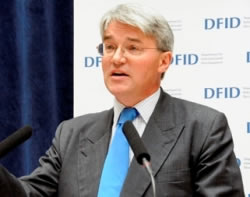 The storm surrounding Andrew Mitchell continues to grow, with the Financial Times today reporting that Whitehall officials were drawing up plans to reclassify energy department programmes as aid. Aid for climate change is a controversial  issue, with many in the NGO community long demanding that aid to help poor countries adapt to the impact of climate change must not be taken from rich countries’ existing aid commitments – to do so would see poor countries effectively paying for a problem they did not cause.

That is why Labour imposed a cap on climate finance spending by the Department for International Development, which from 2013 will prevent the department spending more than 10 per cent of its budget on carbon reduction. As reported by Left Foot Forward, the Coalition Programme made no such commitment, leaving open the option of either transferring the Department of Energy’s £250m annual budget for international climate finance to DfID, or redefining the spending as overseas development aid.

Appearing before the international development select committee last month, Mr Mitchell refused to clarify if the 10 per cent cap would remain until after the Comprehensive Spending Review and his discussions with the climate change secretary. Today’s FT article gives the surest indication yet that those discussions will result in the scrapping of that cap.

As the FT points out, the template for reclassifying projects as development aid could be replicated across Whitehall, expanding Britain’s aid programme to include various Foreign Office and Ministry of Defence programmes.

This potential raiding of DfID’s budget again raises key questions of leadership; firstly, of Mr Mitchell himself: is he strong enough to stand up for DfID and its budget in the Cabinet?

If he can’t defend the budget from DECC, how will he stop his more senior Cabinet colleagues in the Foreign Office and Ministry of Defence? When David Cameron announced in June £200m of support for Afghanistan through the DfID budget, Labour argued that some of this could have come from other departmental budgets – a sign of things to come?

Secondly, questions will be asked of the Liberal Democrats and Nick Clegg.

As Left Foot Forward reported previously, the Lib Dems have gone AWOL on their manifesto promises on international development. Specifically, their pledge on climate aid went further than Labour’s, promising a complete cap on climate aid so it would be 100 per cent additional.

Secretary of State for Scotland Michael Moore, previously the Lib Dem spokesman on DfID, even warned during the electon of the Conservative Party’s plans for raiding DfID, saying:

“One thing that we will need to look very carefully at is that we don’t see DfID’s budget being the recipient of a lot of resources only for it then to be funneled back to the FCO or the MoD.”

So where are the Lib Dems now? Only weeks away from a key UN summit on the Millennium Development Goals in New York at which the deputy prime minister is due to appear, instead of clear red lines and objectives we have only a leaked documents showing plans to abandon over eighty key international committments.

Shadow DfID minister Gareth Thomas has written to the Lib Dem leader to call on him to intervene to reverse the proposed DfID cuts whilst he is at the helm:

“I am calling on Nick Clegg to step up to the mark while he is in charge and step in to reverse this dossier of cuts to show leadership in advance of the UN Summit.”

On Wednesday Mr Clegg found himself red faced when it emerged the children’s centre he was visiting was being cut by his coalition partners; if he doesn’t intervene to stop the development secretary’s proposed cuts, he may find himself singing the blues and waking up to greater embarrassment in New York.