Nick Clegg weighed in to the debate on the Institute for Fiscal Studies (IFS) report into the Budget this afternoon, taking to the airwaves to criticise the report for being "by definition partial" - yet in April, in the final TV leaders' debate, he cited the IFS for their praising of his party's general election manifesto. 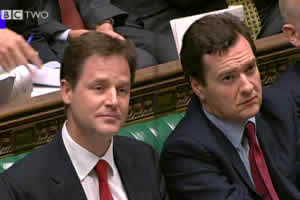 Nick Clegg weighed in to the debate on the Institute for Fiscal Studies (IFS) report into the Budget this afternoon, taking to the airwaves to criticise the report for being “by definition partial” – yet in April, in the final TV leaders’ debate, he cited the IFS for their praising of his party’s general election manifesto.

The Liberal Democrat leader had said:

“I was really delighted at the Institute of Fiscal Studies when they compared the three parties’ manifestos this week said very, very clearly, and very directly, that our proposal to lift the income tax threshold to £10,000 is the best incentive to work.”

“Much of the IFS analysis was about benefits, but we want to get people off benefits and into work.

“That is a plan for real fairness, that is progressive and I think that is a richer understanding of what fairness is about than a single snapshot, that doesn’t – that simpy doesn’t – provide the full picture of what we’re trying to do over the coming months and years.”

Mr Clegg is in good company today criticising the IFS’ work. Mark Wallace, formerly of the TaxPayers’ Alliance and now a political consultant has today claimed that the IFS “swing to the left”. While Phillip Blond in a Sky interview claimed that the research was unreliable since it excluded the impact of “capital gains tax increases on the rich”.

“The capital gains tax measures that were excluded only came to about £800m compared to £4.1 billion in welfare measures excluded by the Treasury in their assessment.”

But while Clegg continues to defend the fairness of his Budget despite the evidence, a number of Conservatives are seeking to move the goal posts.

Last week, George Osborne claimed that the Budget was fair when examined on an “intergenerational” basis – a claim refuted at the Bank of England’s Monetary Policy Roundtable; Treasury minister Mark Hoban today invoked the Thatcherite idea of trickle down economics as a basis for the fairness of the Budget; and as Sunder Katwala outlines Spectator editor Fraser Nelson has called for the requirement to measure the impact of the Budget and other Government decisions on minority groups to be scrapped.