The shadow Chancellor says the rise in GDP "show the results of the Labour Government’s approach to supporting the recovery" - and that the Coalition "will have to accept responsibility for the risks they are taking with the economy". 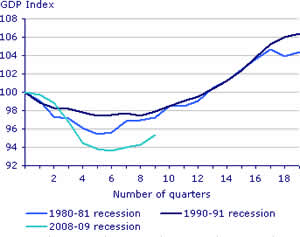 The shadow Chancellor says the rise in GDP “show the results of the Labour Government’s approach to supporting the recovery” – and that the Coalition “will have to accept responsibility for the risks they are taking with the economy”. UK Gross Domestic Product rose 1.1 per cent in the second quarter of 2010, with the increase in output “due mainly to increases in business services and finance and construction”, the Office for National Statistics revealed today.

The increase in output “was due mainly to increases in business services and finance and construction”, the ONS said. Output of the service industries increased 0.9 per cent, output of manufacturing rose 1.6 per cent, and output in construction rose 6.6 per cent. GDP increased 1.6 per cent in Q2 2010 compared with Q2 2009.

“This is the fastest growth we have seen for over four years. It shows that confidence was returning. And you can see the success of maintaining support for important sectors like construction.

“And this is the final nail in the coffin of the Coalition’s argument that things are worse than they believed before the election. Today’s figures show that growth was twice as fast as expected. The Coalition’s economic policy is not inevitable – it’s the choice they’ve made.

And shadow Chief Secretary Liam Byrne, writing on his blog, points out that, compared to previous recessions, “Labour managed the recovery in a way that kept unemployment down”. Two weeks ago, Left Foot Forward reported the OECD’s questioning of the Coalition’s decision to scrap the Future Jobs Fund.

The OECD employment outlook had said:

“The introduction [by Labour] of the Flexible New Deal (FND) in October 2009 has been useful in the context of the recession because it puts an increased focus on screening skills at an early stage of the unemployment spell, targeting the low-skilled unemployed who are likely to face greater challenges in finding employment.”

“While the large fiscal deficit makes it essential to focus on cost-effective programmes and target the most disadvantaged groups, labour market policies should remain adequately funded. In this context, it may also be of concern that the new Budget ends funding for two crisis measures, namely, the Future Jobs Fund and the Six Month Offer.”

10 Responses to “Darling: GDP rise due to Labour’s approach to “supporting the recovery””